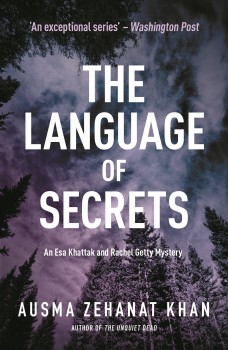 The Language of Secrets

Detective Esa Khattack and his partner Rachael Getty are on the case of the killing of an undercover colleague who was investigating a suspected Islamic terrorist plot.

Detectives Esa Khattack and Rachael Getty were introduced in The Unquiet Dead, a tale of Canadian immigrants struggling with unresolved conflict from the war in the Balkans. In this latest book the focus is on another group of immigrants, this time from Pakistan and Somalia, who the RCMP have under observation for a suspected terrorist plot somewhere in Toronto.

The surveillance is being handled by INSET, who specialise in national security, specifically by a team headed by Ciprian Coale, a rival who resents Khattack’s promotion to head the Community Policing Section. Coale is directed to bring Khattack in, however, when a policeman working undercover, Mohasin, is shot and killed at a camping ground where the terrorists are training.

Khattack is directed to investigate the murder, and to keep Mohasin’s radio host father from publicising his son’s death, while doing nothing to disrupt the INSET investigation. This effectively impossible task creates anxiety for Khattack and Getty, who he brings in to assist.  Getty is instructed to visit the mosque at the centre of the plot, claim to be interested in the Islamic faith, and then ingratiate herself with the leading players.

The tension set up by the difficulty of the job is compounded by the need to lie to Mohasin’s father and wife about what Mohasin was doing when he was killed, and the fact that the leader of the plot, the charismatic Hassan Ashkouri, has pulled in Khattack’s sister, Rukshanda. Thankfully, Getty has managed to resolve some of the issues with her parents and brother which caused such mental turmoil in the last episode, but there is still plenty of angst to go round.

Things reach a climax at the year’s end, the planned date for the atrocity, when Hassan takes the acolytes, including Getty, back to camp in the snow. Difficulties with communication give rise to worries about the safety of Getty, and of several of the younger members of the group who Getty thinks are innocent dupes of Hassan and his more dedicated followers.

I do find that the author’s exploitation of every possible opportunity for conflict between the key persons rather wearing, and in some instances that her enthusiasm to create such tension leads her to develop the plot in ways which one feel instinctively a little off: Coale’s open hostility to Khattack, for example, and the planting of Getty in such an obvious manner. Rukshanda displays all the emotional stability of a five-year-old.

On the other hand, the exploration of the variety of characters which find themselves attracted to the radical teachings at the mosque do help to explain adherence to such a nihilist philosophy and could be seen as a welcome attempt to promote understanding about a subject which produces so much fear.