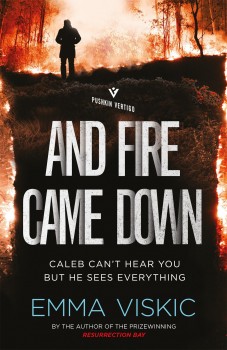 And Fire Came Down

Caleb Zelic is visited by a girl seeking his help and returns to his home of Resurrection Bay to try to establish what she was running from.

Caleb Zelic runs a small private investigation service in Melbourne, Australia. He is profoundly deaf after a childhood attack of meningitis, which greatly complicates his life, especially as he stubbornly refuses to admit to disability. He is also traumatised by recent events in which his business partner Frankie turned out to have a drug habit, exposing Caleb to an enemy who was eventually bested in a brutal fight and his wife Kat to injury, as detailed in Resurrection Bay.

Caleb is contacted by Portia, a girl on the run from her hometown of Resurrection Bay, but before any information is exchanged she is killed in traffic while running to escape a pursuer. Although Caleb has never met the girl before, he is determined to find out what is going on, and immediately visits their mutual town of origin to investigate.

On arrival he finds Resurrection Bay both familiar but also changed. His wife Kat is around after time away recovering, and tentatively prepared to re-establish contact with Caleb. His brother Ant, for a long time a drug-habituated waster, has cleaned up his act and is in a stable relationship. However, the town is in the grip of a series of apparently random acts of vandalism, aimed particularly at the ‘Mish’, the home of the Koori native Australian community.

Caleb goes about his task in his normal manner, that is to say boldly approaching anyone who he thinks has useful information and pressing his questions until he gets a response. Portia’s father is cold and has nothing to offer, and despite his links to the Koori through his wife they close ranks against an ‘outsider’. But Caleb’s appearance has not gone unnoticed.

Caleb is convinced that the local strife is related to the drug business in town, in which the Copperheads, a biker gang, play a leading part. However, he finds it difficult to see how Portia, an environmental enthusiast from a rich family, can be connected. His old partner Frankie is also showing up occasionally too, seeking something she left in Caleb’s keeping: could she also be involved?

This book certainly maintains a consistently high level of tension. Caleb spends much of his life in a permanent state of confusion about what is being said, and his demands for information overstretch the bounds of prudence. His well-meaning but crude activities alarm Kat, his brother Ant, and even Frankie, and put them all at risk. Several characters suggest that he needs therapy, and no wonder. It does, nonetheless, make for an exciting ride, if rather a bumpy one.