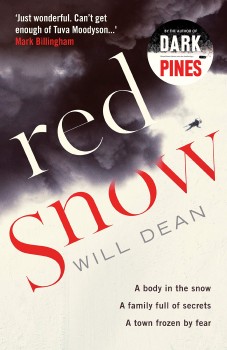 The tiny frozen Swedish town of Gavrik is dominated by the liquorice factory, source of employment but also some weirdness, and a long history of unexplained deaths.

Gavrik is a small town in the north of Sweden and at the turn of the year suffering one of its coldest winters for decades, with temperatures descending to minus 20C. Local reporter Tuva Moodyson has secured a new job far to the south and is working out her final week in Gavrik when two fatalities in the space of a few days shake the town.

Both deaths occur in the Grimberg liquorice factory, which for generations has provided employment for half the town. First Gustav Grimberg, the boss of the factory, throws himself off one of his factory chimneys. Tuva makes a tour of the factory a few days later with the janitor and comes across a murdered mployee.

Tuva’s access allows her to fulfil two purposes. The townspeople are hungry for information; she has also been invited by a writer, David Holmqvist, to interview the remaining Grimbergs about the history of the family, and in particular several other deaths in the past about which there is plenty of rumour and speculation. Tuva is determined to get some answers in the week she has left.

She speaks to Gustav’s wife Anna-Britta, his mother Cecilia and his daughter Karin, who seem to trust her but are guarded in their revelations. These remaining Grimbergs live above the factory in quarters rumoured to be palatial but, as Tuva discovers, far from luxurious. The trio are also very odd and take the local preoccupation with ‘precautions’ – superstitious items set out in a ritual manner – to a point where their sanity appears in question.

Tuva gains their confidence, perhaps because she too is rather odd. She still agonises about the deaths of her parents, and her lack of warmth to her mother, despite the evidence that neither parent did much to merit her love. She downs substantial amounts of alcohol to get to sleep at night and also has distinct likes and dislikes when it comes to the people of the town, and little compunction in letting others know about it. She is, though, an engaging character.

Tuva suffers from deafness after a bout of meningitis as a child, but treats this as fun and a challenge, and makes full use of her skill as a lip-reader to gather information for her newspaper. She disdains the label of disabled, brushing aside problems with her deaf aids as a minor annoyance.

The book lacks trees to complete the trio of traditional requirements for a Scandi noir but has angst and snow in spades. While the townsfolk mutter darkly about the ‘Ferryman’ said to be responsible for the deaths and leaving spiteful charms about the place, the snow falls in sheets and any slip can lead to a quick death from the cold. The residents spend half their life getting into or out of thermal gear, fleeces and boots. Garvik is a good place to read about and makes you grateful that you don’t have to be there.