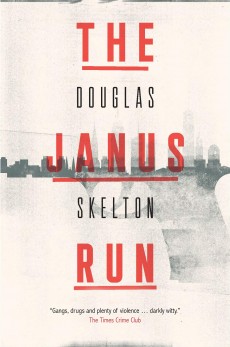 Coleman Lang awakes to find his girlfriend dead on the bed next to him. When autopsy results show she has been murdered, the police like him for the crime.

Cole Lang is dazed when his lawyer girlfriend Gina dies in his bed. A careful post-mortem shows she was killed by an obscure poison, and the police have Cole in the frame. Cole’s initial suspicion is of his ex-wife and her weird brother – the Psycho Twins, as he calls them.

But it turns out Cole and Gina had both been keeping quiet on their histories. Gina is the daughter of Anthony Falcone, a mob killer who turned rat and has been living for ten years in a witness protection program. Cole was also once a killer for a secret government agency called Janus, although he burnt out and for a decade has to all appearances been a mild-mannered advertising executive.

Falcone has been living on the other side of the country but comes back to New York to avenge his daughter. Falcone is only half-convinced by Cole’s protestations of innocence, but the pair join forces to find the real killer. They face not only the police and a mob hit-man sent by Falcone’s old boss Fat Vinnie, but also a killer known as Mr Jinks, sent by a powerful character identified as Logan Fitch, whose motivations become apparent only towards the end of the book.

Douglas Skelton is a journalist-turned-writer of true crime and then crime fiction, latterly with the Davie McCall and Dominic Queste series. The move in setting from his native Scotland to New York is impressive: whether it would convince a resident I don’t know but to an Englishman it comes across as pretty authentic.

As you would imagine with several trained killers brought into conflict, there is plenty of action. The mob characters are familiar from fiction, although Vinnie’s enforcer Nicky the Juke is memorable, if only for his tendency to sing versions of appropriate popular tunes as he goes about his business. We also see progress from the perspective of NYPD Lieutenant Rosie Santoro, whose sophisticated analysis of the case is a source of friction with the US marshal also assigned.

Cole turns out to be surprisingly effective at secret agent stuff given that he has spent the last ten years at a desk; you would have thought that his aim and speed with a gun, and his fists, would have severely depreciated. You might also feel a little sceptical about a covert government agency who arranges for extra-judicial murders, although I daresay few readers would absolutely doubt it these days.

And despite minor quibbles about one or two plot points, there is much to enjoy here. The action comes thick and fast, and with heavily-armed foes spraying bullets the protagonist needs plenty of resilience. Having renewed his taste for life on the edge, it seems unlikely that he will go back to advertising.