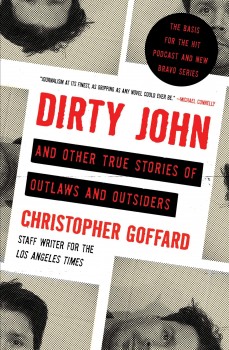 Dirty John and Other True Stories of Outlaws and Outsiders

Fifteen true stories from a Los Angeles Times staff writer sympathetically exploring the lives of people whose experience has been touched by crime or stress.

The author’s introduction to this collection declares that these are all stories rather than journalistic articles about criminals and their victims, none of whom are anybody famous. They range in length from ten to 50 pages.

The most energising involve tales of a crime which slowly unfold: a woman who is lured into marriage with a con-man who threatens her family (Dirty John), a man accused of tying-up and assaulting his ex-wife (The Accusations) and a lawyer couple who planted drugs in a woman’s car in petty revenge (Framed).

These three are the longest stories and are as gripping as any thriller. While by the end they are all resolved in a way broadly compatible with what one might call justice, the reader cannot but be horrified at the ease with which perfectly normal law-abiding people can be ensnared in the meshes of evil-doers or end up on the wrong side of the justice system. The title story Dirty John was initially released as a podcast, said to have been downloaded more than 20 million times.

The other stories are more about life experience and preoccupations, sometimes triggered by a specific event. A few are linked to the military: a veteran of the Gulf War whose experiences continue to haunt him (Healing Sergeant Warren), a Syrian mother who found asylum in Sweden but is distanced from her family (The Choice) and a gay US soldier brave enough to speak out (The Hidden Man).

Some explain full-time occupation not always easy to understand: a poorly paid and low status Public Defender (The $40 Lawyer), kids who find it difficult to settle and who ride boxcars (Riders) and men who act as sentinels against immigrants from Mexico (Border Warrior).

In some cases, crime has had a dramatic effect on the next generation. The son of a man in jail for murder continues to believe in his father (The Prisoner), a boy who discovers his sister’s dismembered body becomes a policemen (The Rookie) and a man shamed by his father’s failure to complete his war service seeks a pardon (The Deserter’s Son).

Perhaps the most haunting are stories rooted long in the past: a Black Panther who has carved a life half a world away from his home (The Exile), a Vietnamese mother who made her way to the States to recover her son after 20 years (How She Found Him) and old men without close family who spend their time building boats they may never finish (The Old Men and the Sea).

While these pieces have a different sort of appeal to the headline stories, they all are well told. The author paces his tales well, keeps completely out of the picture himself, and allows the interesting facets of his subjects to emerge in a natural way.