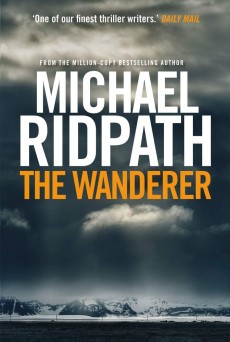 Magnus Jonson is an American Icelander newly returned to the Reykjavik police force. He’s called to investigate the murder of a young Italian tourist found at a sacred church in northern Iceland.

The Wanderer’s prologue set in 1979 in Italy offers a teasing glimpse into the world of academics, and conspiracies between scholars and collectors of old books, and introduces an American professor of Viking history, Nancy Fishburn, who is fascinated by the possibility that Christopher Columbus had valuable information about Iceland in the 15th century. The story goes that the famous Italian explorer had later written a letter to his brother which found its way to the Vatican secret archives. Coupled with the unearthing of wampum shells on a dig in Greenland these two events later get the pulses racing of any Viking enthusiast in the globe.
Move forward to Glaumber in northern Iceland in 2017. A TV crew films a documentary on the life of the legendary Viking, Gudrid the Wanderer. She was Erik the Red’s daughter-in-law, born in Iceland, married in Greenland, had a son in Vinland and then set off to Rome on a pilgrimage. For those unfamiliar, Vinland is an area of coastal North America explored by Norse Vikings, where Leif Erikson first landed about five centuries prior to the voyages of Columbus and John Cabot. Those following closely the two sagas which describe the discovery of these far-flung lands are captivated by the retelling of Gudrid’s tale.
The filming gets interrupted when Carlotta, a young Italian tourist, is found brutally murdered at a sacred church on location. Shocked and confused members of the team don’t know how to react to the death and consequently to the police involvement. They’re concerned that their plans to work on locations in Greenland will be thwarted, so their reluctant to be involved in the investigation frustrates Magnus (Ragnarsson) Jonson who’s in charge.
But the search for the killer must go on, even if it brings uncomfortable connections and secrets to the fore. Jealousies run riot and the suspicions of a monumental historical hoax are being voiced. The financial livelihood of English producer Suzy Henshaw and her production company depend on the success and accuracy of the documentary, presenter Eygló is worried about her career which is just taking off, and the academics – Icelandic Dr Einar Thorsteinsson and Italian Professor Marco Beccari – will do anything to preserve their reputation, each with their own agenda. Yet all their lives might be in danger as Carlotta is only the first victim.
Michael Ridpath weaves the internationally-flavoured plot with ease and precision while balancing the right amount of suspense and twists with more reflective passages on the sense of belonging and the life itself. The investigation conducted by Magnus brings together various strands which are interesting to follow, and his own story throws many clever elements into the mix.
Magnus is an Icelander brought up in America and working at Boston’s Homicide Unit. He’s back in the Reykjavik police force after his previous three-year secondment. He feels like an outsider in the emotional no-man’s land in the wake of solving his father’s murder, wistful and quite lonely, missing his fiery Icelandic ex-lover and navigating different international police procedures. However, he is remarkably normal and undamaged and quite a decent man to boot, with a healthy interest in Eygló and in history.
The harsh and beautiful landscapes of Iceland and Greenland come alive seen through the eyes of Ridpath and his hero Magnus Jonson as both islands and countries hide countless stories, which are fascinating, unsettling and intriguing. Echoes of the sagas are present in the psyches of all characters. Deep-seated animosities amongst the researches, writers and even lowly archaeologists and questions about preserving one’s honour appear more important than solving a crime. This adds tension and keeps the reader guessing as to the identity of the killer.
The Wanderer is the fifth book in the Magnus Iceland series, and I would encourage everyone to read them all of them. They are a gripping and intelligent treat!