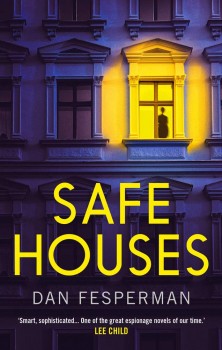 Helen Abell, a young woman new to the CIA, arrives in Berlin in 1979. She is disappointed when her Chief of Station, who dislikes her, assigns her to a routine job overseeing a number of safe houses. One evening she is in one of the houses when two sets of visitors arrive unannounced and she learns two very important secrets.

Helen Abell, a young woman new to the CIA, arrives in Berlin in 1979 and has to face two uncomfortable facts. First, Berlin is no longer the centre of cold war spying activity and the CIA is more concerned with Iran. Secondly, she realises immediately that her Chief of Station, Ladd Herrington, does not like her and that she is not about to receive training as a field operative. Instead she is given a number of safe houses to superintend – a job which, by comparison, she regards as little better than that of a housekeeper.

One evening, however, she has two sets of visitors. The first two – both men – speak in some sort of code that seems unnecessary in a safe house and which she certainly cannot understand. The second set of visitors – a man and a young woman – leave her determined to ensure that the man faces justice. However, she realises that she will have to proceed cautiously because technically she ought not to have been in the house at all and could lose her job were it to become known.

The novel has an unusual construction because we are told almost at the start that, having witnessed these two visits to the house, Helen was murdered in her bed 35 years later.

The book then begins to move back and forward between events in 1979 and 2014 when Helen's daughter, Anna, employs a rather mysterious man, named Henry Mattick, to look into her mother's death – not to catch the murderer, since that is already known, but to find out what possible motive there could have been for the crime. It soon becomes obvious to him that Helen had worked for the CIA when she was young and that her death was linked to events that occurred at that time. The author very skilfully links the actions that the young Helen took with those that Anna and Mattick discover as a result of their enquiries.

Most of the plot is linked to what took place in the second visit to the house. In fact, it is quite possible to imagine this novel as having been written based only on that one visit. This, however, is not a criticism of its structure because we are provided with facts about the formation of the United States intelligence services during the war that are in themselves highly interesting.

However, the attempt to link the two in what is a rather too-involved ending is only partly successful. In fact, the ending as a whole appears rather rushed and in some places not entirely comprehensible. This is, though, only a minor criticism of a novel which is on the whole highly convincing in its portrayal of an intelligence organisation