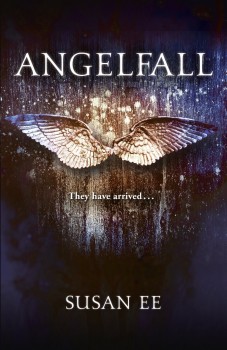 The world has been reduced to ruins. All Penryn is trying to do is stay alive, and look after her disabled sister and mentally unstable mother. That’s easier said than done when the earth is still under attack from angels.

Every now and again a book comes along that gets its talons into you and just won’t let go. It happened to me at the age of eight with The Hobbit when I read for most of the night under the bed covers by torchlight and it’s happened again with Angelfall. I started this young adult thriller early in the evening, read continuously until nearly 2am and then finished it the following morning.

The book is dark, chilling, fascinating and utterly riveting. It’s also post-apocalyptic, which is usually a winner with me, and at times it makes Philip Pullman’s Dark Materials trilogy look almost fluffy.

The earth has been reduced to ruins. Small patches of survivors are fighting each other for food and gangs are roaming everywhere. In the once prosperous Silicon Valley, Penryn – named after an interstate junction – is trying to stay alive whilst looking after her seven-year-old sister Paige, and her mentally unstable mother who is convinced that she’s being hunted by demons. And in the world Penryn has to contend with, that could well be true.

They’re trying to escape to the hills, with Penryn pushing her sister in a wheelchair and her mother pushing a shopping trolley laden with rotten eggs. They do their best to stay out of trouble, but that doesn’t last long, and Penryn soon gets her first site of one of earth’s destroyers, an angel. Yes, an actual angel with wings and a sword.

The confusing thing is that he’s being hunted and beaten by his own kind, and Penryn watches as both his snowy wings are severed from his body. Her kind-hearted sister’s gasp of horror gives them away, and one of the angels turns on them. On the principle that the enemy of my enemy is my friend, Penryn throws the injured angel’s sword back to him in the hope of distracting the others. It works, but as the other angels flee, one of them snatches Paige.

Penryn’s only hope of finding where her sister is being taken lies in keeping the injured angel alive and extracting the information from him. Thus begins an unlikely and at times extremely unstable alliance between Penryn and the angel known as Raffe.

Angelfall is one of the best examples of show not tell that I’ve encountered in a long time. The cosmology is drip-fed rather than explained, but there are few more powerful ways of setting a scene than by the information that the Archangel Gabriel was shot out of the sky over Jerusalem. That probably tells you all you need to know about the state of human-angel relations.

Told in the present tense by Penryn, Angelfall is a powerful tale of one girl’s struggle for survival in the midst of total chaos, caught between the human resistance on one hand and her dependence on her enforced travelling companion on the other. She needs Raffe to help her to survive, but on the other hand she desperately wants to see the freedom fighters succeed.

Ee’s writing is taut yet descriptive, the book hits the ground running and the pace never slackens. Her dialogue is crisp and believable and I am desperate to know more about the background to this most original of apocalypses. I am now about to start on the sequel, World After. If I’m not back in 12 hours, send a search party.