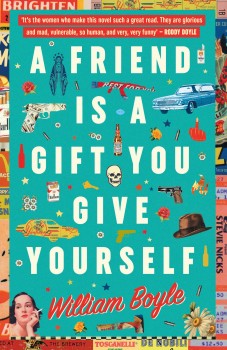 A Friend is a Gift You Give Yourself

Brooklyn mob widow Rena Ruggiero is not impressed by her 80-year-old neighbour Enzio’s clumsy attempts at seduction, and clouts him with an ashtray. Fearing she has killed him, she steals Enzio’s 1962 Chevy Impala and drives to the Bronx where she hopes her daughter Adrienne will know what to do.

Things very soon start to get complicated. Enzio, heavily bandaged, comes looking for his car. One of Wolfstein’s victims has tracked her down and shows up seeking comfort, or at least an apology. Adrienne’s partner Richie arrives with a trunk full of stolen cash looking to take Adrienne and Lucia away, shortly followed by Crea, a mob thug with a hammer out to spoil Richie’s plans.

Action follows at a furious pace, with Lucia emerging as the most dynamic character. Lucia is 17 and tough as they come, determined to hold on to any of Richie’s cash that comes her way and find her father, someone who her mother would never identify. She despises her mother and has little trust for the others. But eventually the women find mutual support and come together in something like a family.

This is a terrific book: fast-moving, full of incident, very funny and, despite the bleakness of the criminal and mob life depicted, finally uplifting. It gives a pretty raw impression of the life in the American crime underworld: the horizons of the characters depicted are frankly appalling, and Crea with his hammer is just one extreme example of the violence of this lifestyle. There are plenty of references to films about the mob and the cars and guns beloved of the tribe. But there is kindness too, and what emerges from the mouths of the cast comes across as honest and absolutely authentic.

The author’s first, Gravesend, was described in review here in April 2018 as ‘a sad sick tale’, claustrophobic and a tough read. This latest work still has the ‘Soprano-like dialogue’ and nobody is likely to take it as a handbook for gracious living. The author has, however, managed to imbue the admittedly morally compromised leading characters with some admirable characteristics: a thirst for adventure, a willingness to take risks for friends and above all an ability to be true to themselves.