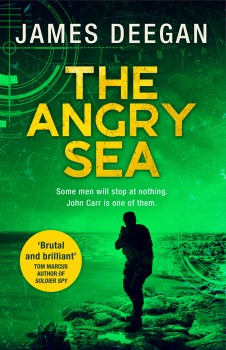 Former SAS sergeant John Carr is caught up in a terror attack whilst on holiday in Spain and ends up getting his wish – to track down and take out the men responsible for the atrocity.

I normally keep my eye out for former SAS soldiers-turned authors, as I thoroughly enjoy both Andy McNab and Chris Ryan’s military thrillers, but somehow I managed to miss James Deegan’s debut, Once a Pilgrim, but after reading his second book, The Angry Sea, that’s an omission I have every intention of remedying.

Deegan spent 17 years in the SAS, retiring as a Regimental Sergeant Major and his wealth of military experience explodes on the page like a piece of heavy ordnance in a firefight. I like military stuff (I even used to plough through the sort of reams and reams of detail that used to bog down Len Deighton’s spy thrillers) and Deegan knows how to introduce enough to leave the indelible impression that he knows his stuff without turning into a king-sized bore.

The Angry Sea starts with former SAS Sergeant Major John Carr relaxing on a beach on holiday with his family in Sapin. It doesn’t take long for his son – also in the army and about to undergo the gruelling SAS selection procedures – to start to take the piss out of his dad for taking an interest in the various bikini-clad women on the beach, and the pair quickly head off to a nearby bar.

Shortly after, both the beach and a cruise ship are attacked in an audacious terrorist strike. Unlike most people, when the bullets start flying, Carr runs into danger rather than away from it, and as a result, he becomes one of the only people who is able to identify one of the perpetrators. When the body count is finally ascertained, the investigation into the atrocity takes an unexpected turn when it becomes clear that one of the three young women taken hostage by the terrorists is the British Prime Minister’s daughter. It comes as no surprise when John Carr is asked to put together a wholly deniable team with the aim of finding and freeing the hostages.

The Angry Sea is a superb example of a military thriller. The action is described in short, sharp sentences, with no wasted words and even fewer wasted bullets. It has all the classic elements that make films such as The Magnificent Seven so watchable: likeable heroes, almost insurmountable odds and some damn fine siege scenes, although in this instance Carr and his friends are the ones trying to storm the base. The action scenes are meticulously planned and executed in a very cinematic style. I felt I was watching the story unfold on a big screen inside my own head as I followed each scene step by step, dodging when the bullets got too close for comfort.

The political angles are deftly handled too, and Deegan manages to turn out politicians who are actually thoroughly repellent, which is a hard trick to pull off when set against the backdrop of the current bunch of venal muppets in Downing Street. His spooks are an entertaining bunch as well.

I’m now going to find time to slot the first John Carr thriller into my already tottering reading pile, and trust me, there’s no greater accolade than that if you’ve seen the size of my book mountains!