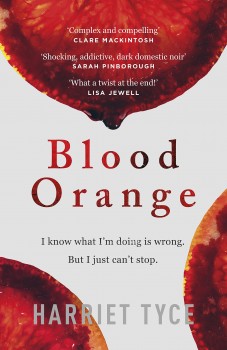 Barrister Alison Bailey is married with a daughter but infatuated with solicitor Patrick. She is horrified to receive messages from someone who knows what she is doing.

Alison Bailey is a London barrister with a healthy practice, but her marriage is in trouble: her husband Carl resents her binge-drinking and accuses her of irresponsibility. Carl is a self-employed therapist and has time available to take up the largest share of the care of their daughter Matilda.

One of the reasons Alison spends less time at home is her liaison with Patrick, a solicitor – a relationship which is exclusively sexual. She is aware their meetings are wrong but is unable to stop, even when she begins receiving text messages from someone who clearly knows what is going on, who could permanently derail her marriage and her career.

Alison receives a new brief, her first murder case. A woman, Madeleine, is accused of the murder of her husband. Her guilt initially seems clear as she was found covered in blood next to the body of her repeatedly stabbed husband, but as Madeleine is encouraged to talk about the relationship it emerges that there were elements of coercive control which offer the possibility of a viable defence.

The stories of Alison, and that of her client, are intertwined throughout the book, both being told in the present tense from Alison’s perspective. Pale echoes do resonate from one story to the other, but the author’s combination of the two parts seems to be more about bulking out the story. The two parts are, however, skilfully combined to regulate pacing and add suspense.

The first part of the book invites the reader to look on in horror at Alison’s feral couplings with the selfish and brutal Patrick, at the risk of her marriage and more particularly her contact with her daughter who she clearly loves. Carl seems long-suffering and it is tempting to see him as the victim in all this, but from the start there are small hints that Alison’s problems are not all of her own making.

As the book progresses and we get to see more of Alison when sober, at work and at leisure, it becomes clear that she is extremely competent and that allowing her sexual adventures with Patrick to define her would be a mistake. Events put her at risk, however.

What made the book for me is the series of surprises which the author springs in the last few chapters. These transform the main tale from a somewhat tawdry domestic drama into something altogether darker. And then there is a terrific twist at the end bringing the book to an entirely unexpected conclusion.