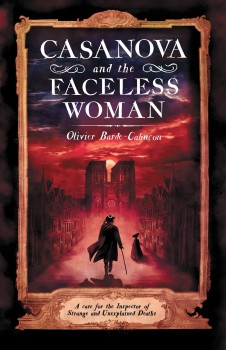 Casanova and the Faceless Woman

Louis XV’s Inspector for Strange and Unexplained Deaths investigates the macabre death of a young whore and is drawn into a deadly web of intrigue where he is partnered with adventurer and seducer Giacomo Casanova.

French author Olivier Barde-Cabuçon’s creation of the Inspector for Strange and Unexplained Deaths, has so far featured in seven historical mysteries. This powerful, stylish and quite brilliant story won the Prix Sang d’Encre for crime fiction in 2012 and is the first of the series to be translated into English. Special praise should go to Louise Rogers Lalourie for her translation, which loses absolutely nothing in its rendering and presents the sights, smells, excesses and intrigues of 18th century pre-revolutionary Paris with real style and panache.

In the 1760s, the France of Louis XV is in turmoil. Outside the gates of the magnificent Versailles palace, Paris is sunk in a mire of squalor and crime. Finance ministers cheat and extort on a grand scale while the peasants work until they drop and citizens pay huge taxes.
At court the pomp and magnificence of his predecessor, the Sun King Louis XIV, remains. But the king is blamed for diplomatic, military and economic losses including the Austrian Netherlands and the ceding of New France in the Americas to Spain and Great Britain at the end of the disastrous Seven Years’ War.

His long reign is descending into sexual excess, bordering on paedophilia. His influential mistress, confidante and advisor, Madame de Pompadour, helps him choose or demote ministers, and who, following the end of their sexual relationship, has set up the Maison Aux Cerfs, the house in Versailles where he entertains an increasingly youthful harem, bought or kidnapped for his pleasure – and to maintain her influence by ensuring no rival could supplant her.

At the same time, a philosophical movement now known as the Enlightenment – its major exponents were Diderot, Voltaire and Rousseau – whose central doctrines were individual liberty and religious tolerance, emerges in opposition to the absolute monarchy and the fixed dogmas of the Roman Catholic Church.

The movement finds a natural home in the secretive and ritualistic Freemasons, whose major opponent, led by the reactionary Jesuits, becomes involved in increasingly ferocious political – and physical – battles.

In 1757, the King is attacked and stabbed by the demented Robert-François Damiens as he climbs into his carriage in the courtyard of the Grand Trianon. He is saved by the intervention of a young man, once himself a revolutionary, who is rewarded by a title and the post of Inspector for Strange and Unexplained Deaths.

The Chevalier de Volnay is an upright, if rather uptight, man of great integrity and a success at his strange job. But when the body of a young whore is found with macabre and ghastly mutilations that shock even the hardened city watch, he finds himself in a deadly web of intrigue, in which his chance companion – and eventual rival – is the notorious adventurer and seducer Giacomo Casanova.

As another butchered corpse is discovered, the inspector finds his revolutionary past exposed and his life in grave danger. To find the way to the truth he must pick a path between the factions warring for control of the throne.

This is everything you would expect from a French historical drama – secret societies, a heretic monk, a fortune teller, swordplay, fashion, art, sex and politics. It’s a racy historical mystery with real style, dash and brilliance. But behind the incredibly twisted plot, the reader can sense a turning point of history as alchemy becomes science, philosophers start to oppose the church, and liberty and free-will are valued for the first time.

The inspector and Casanova carry the riveting story to an unexpected conclusion with an elan and brilliance you would expect from both the setting and Barde-Cabuçon’s clever use of language and atmosphere which keeps the suspense at maximum level to the end.