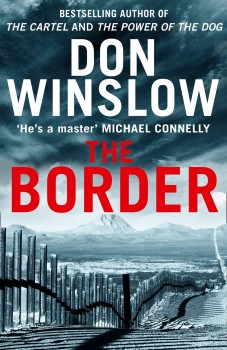 While a battle for control of the drugs trade rages in Mexico, a man comes to head the DEA in Washington determined to combat the drug cash that’s buying influence at US government level.

This masterful work is the culmination of Winslow’s portrayal of the drug trade begun in The Cartel and The Power of the Dog, exposing the mechanisms of operation in Mexico and in the US in convincing detail. The story is brought to life by the focus on a number of individuals caught up in the trade in various ways, whose stories are gripping and frequently harrowing, all told in the present tense.

Only rarely do you come across a work of fiction that explains clearly how the world really works, or one that generates a compulsion to keep reading to the last page. This book does both.

The key protagonist is Art Keller, a man with a long history in anti-drug operations mounted by the CIA against drugs and drug runners in Mexico. He agrees to become director of the Drug Enforcement Agency when the post is offered by a senior politician in Washington, who knows that Keller’s contacts will enable him to be effective, and that his past participation in illegal activities, including killings, will keep him under control.

From Washington, Keller’s influence on events in Mexico is limited, but he is determined to combat drug activities in the US. He works through the NYPD to get a gold shield detective, Cirello, to work undercover to identify key supply routes. He also appoints a special DEA agent to investigate the placing of huge sums of drug money in US real estate, with links going right to the top of the American government.

In Mexico, things are in flux. A major battle between the Sinaloa cartel and the Zetas has resulted in the deaths of all the leaders, including Adan Barrera, who as head of Sinaloa had taken a dominant position which helped to reduce disputes. Now that Adan is dead, contenders for his crown are actively competing for control. The Machiavellian scheming and violence involved makes the Game of Thrones look like a child’s picnic.

Minor characters include Sean Callan, a hit man in seclusion in Costa Rica who gets pulled back into the dispute by an obligation to Barrera’s sister Elena. We also meet Nico and Flor, two children living on a dump in Guatemala who set off for the US and suffer the most terrible privations.

It is not easy to avoid sympathising with most of the cast, including those in Mexico controlling the flow of narcotics, who survive only through constant alertness and for whom the penalty of any lapse is sudden death at best. Winslow shows how drugs taint everything they touch, and that the ‘war against drugs’ has distorted the US justice and prison system.