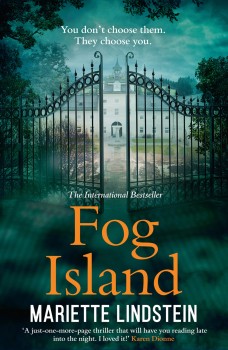 Sofia accepts an offer of employment at a mysterious New Age movement. She’s excited about creating a library at its headquarters on an isolated island but gradually becomes aware how impossible is to leave the cult.

Sofia, who is fresh out of the university and uncertain about her professional future, attends an interesting lecture. She is instantly smitten by Franz Oswald, the handsome charming leader of a mysterious New Age movement, located in a spectacular manor on the West Fog Island. She gets invited to visit this stunning and peaceful place, complete with delicious food, and no distractions from mobiles and internet.
Sofia arrives with a friend, and is instantly dazzled by the tranquillity, beauty and the overwhelming sense that ViaTerra’s way of life is the only option to survive in the modern world and to actually fix it. Its slogan ‘we walk the way of the earth’ represents the idea of saving humanity from toxins, stress and other evils.
She initially agrees to complete a two-week programme, based on Oswald’s philosophical theses, and afterwards accepts a job offer to stay there for two years and establish a library of books and materials in the spirit of Oswald’s teachings.
Although she’s responsible for the project, absolutely everything is scrutinised by Oswald to fit his doctrine. Some niggling issues appear on the surface of the daily calmness, but Sofia dismisses them, still entranced. She’s confident that she’ll pursue other interests after the end of contract and can’t fathom why people never want to leave the island.
As Oswald’s megalomania and hunger for power grows, cracks become more visible in the well-oiled machine. Heaven for stressed out ordinary people and celebrities alike turns into a totalitarian slave camp. Guests stop arriving. Employees are terrorised, punished and humiliated, cut off from the outside world and forced to work extremely long hours, barely surviving on little sleep and small portions of rice and beans. Barbed wire, electric fences and cameras record their every move. Terror and brainwashing work.
Most of the staff still believe that the situation within the confines of the mansion will improve and their leader must have all the help he needs to create perfection. The island’s villagers suspect that the place with its walled grounds, haunted by a ghost of a countess who had fallen to her death from a cliff, hides much worse secrets than couple of suspicious deaths in the past. They have no access to ViaTerra, no contact with the employees, apart from Benjamin, Sofia’s boyfriend, who is allowed to travel to the mainland, and no option to influence what’s happening.
Mariette Lindstein has worked for 25 years at all levels of the Church of Scientology and I assume that she has put most of her life experiences into Fog Island. As a result, her debut novel, translated into English by Rachel Willson-Broyles, feels authentic and nerve-wrecking. As the plot develops the full scale of the manipulation and indoctrination is laid bare. Through Sofia’s initial interest, then anger and despair, Lindstein shows the increasing devotion to the system which basically stems from insecurity, fear and wanting to belong.
This tense psychological thriller will leave you feeling both uncomfortable and fascinated by the psychopathic leader, and the evolution of various emotional states evoked in his followers. Although the novel is set on a Swedish island it could have been sited anywhere in the world, and in any oppressive organisation.