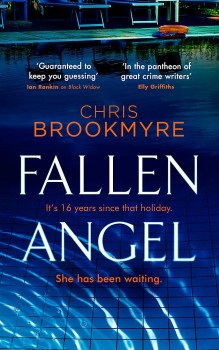 Amanda has nothing to do with the Temple family, but she is about to uncover their secret, with devastating consequences.

Teenager Amanda has fallen on her feet with a summer job, nannying for family friends. But she hardly has time to unpack her suitcase after flying in to Scotland from Canada before her short-term bosses announce they’re all going abroad.
Tough business woman Ivy can’t avoid her mother’s demand for her presence at the family reunion, but she can avoid the complications of a long-term relationship with Jamie. She makes his unwanted presence known in the most brutal, unapologetic way.
Neither wants to be at the adjacent properties in Portugal. For Ivy, it is carving open wounds she has spent 16 years trying to heal. And between a disinterested mother and an inexplicably absent father, Amanda is left holding the baby, with no hope of a moment’s respite.
Then Amanda realises the neighbours are the Temples, a well-known family whose patriarch has just died – the same family who suffered an unsolved tragedy many years before. Amanda becomes increasingly obsessed with unravelling the mystery. But when she finds herself entwined with the dark family’s past, she may regret her fixation.
When I leaf through the first pages of a book and find a family tree, warning bells ring loud. While I have no problem with a large cast of characters, if it needs explaining, it doesn’t bode well. Sadly, in that respect, the bells had chimed for a good reason. I had to refer to the diagram on more than one occasion, and some characters served little or no purpose. However, the positives of this intense novel vastly outweighed the negatives.
Fallen Angel dangles its toes in the literary crime genre. From the first paragraph, the author teases the reader in with complex ideas and thoughts. It is rich in introspection, which in turn gives vibrant, believable characters. Action is there but subtle. Dialogue is tight and pithy. Though the setting could be anywhere warm, Brookmyre succeeds in developing a degree of dark atmosphere in the milieu.
The story hops between 2002 and 2018, with each chapter devoted to one of the major characters, from their point of view. The here and now is in the present tense, 2002 is in the past tense. Amanda is the only character written in the first person.
Amanda is immature and somewhat whiney at the start. She is perhaps the least developed of the characters. Most of the others begin as knotty, uptight people, but as the reader becomes more intimate with them, they demonstrate traits anywhere between self-entitled and ugly to dangerously narcissistic. They are an eclectic collection of human failings, and the Temple family is pure poison, particularly the parents.
Although understated, the psychological aspect is enthralling. The twists, ugly revelations and conspiracy theories will delight any reader looking for depth and the guilty pleasure of watching a nasty family drown in its miseries. It is one of those rare books where I swung between wanting to get to the end and wanting to savour every moment.