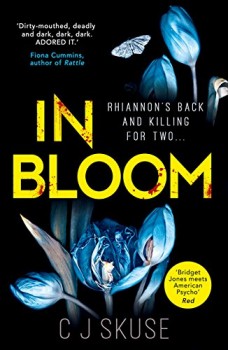 No one has ever stopped Rhiannon killing the lowlifes before. But a little voice inside her says things are about to change.

Rhiannon is a formidable nemesis to paedophiles, rapists and any scum that get in her way. Some would say she takes punishing others a bit too far – including her ex-lover who she chopped up and buried in the garden and her cheating fiancé who is currently in prison, charged with the murders Rhiannon had committed herself.
As far as Rhiannon is concerned, the killing is far from over. Moreover, it’s far more satisfying than the yawn-worthy Kindness Circle meetings with the WOMBATS (Women of Monks Bay and Temperley).
Of course, there are always people trying to rain on Rhiannon’s parade: the press, who have set up camp outside the door, DI Géricault, who seems hell-bent on finding out the truth about the multiple murders, and Craig’s parents, Elaine and Jim, who insist on looking after her while their son is in prison. But these party-poopers have got nothing on the voice inside – the one that is making it clear she can’t be a murderer and a mother. Rhiannon is pregnant and hating every minute of it.
Rhiannon Lewis is quite simply the most three-dimensional character I have come across in years. Skuse portrays her so convincingly that I could almost believe there really is a female vigilante/serial killer out there, tidying up the streets of Britain. Rhiannon is outrageous, sarcastic, filthy-mouthed, sexually insatiable and hilarious. She has no on-off button, and leaves the reader swinging between full-on laughter and red-faced humiliation. She is darker than a coalmine at midnight, but her morals are unquestionable – to her at least!
As for the pregnancy aspect. Oh, my goodness, Skuse has either gone through a few in-house incubations herself or deserves a Nobel prize for her research. Rhiannon’s pre-maternal misery will resonate with many.
As was the case in the first of the Rhiannon Lewis books, Sweet Pea, our anti-hero almost poetically verbalises all the nasty, bitching thoughts most don’t dare admit to giving brain-space. This time, morning sickness and general foetus-fear add to the searing heat of her vicious tongue.
As with the last book, In Bloom reads like a diary in the first-person present tense. And again, Rhiannon delights us with her almost daily list of people she would like to kill. Obviously, she doesn’t get around to knocking off everyone on her personal inventory, but she certainly reduces the number by more than one.
The plot is two-plus-two simple, and its lifeblood is about the main character’s dialogue, introspections and actions. But the story is not short of a sprinkling of interesting twists. In amongst the horror and ha-ha of moments with her pregnancy group, life with the in-laws and even some luring of paedophiles through internet websites, the reader meets a sad and lonely Rhiannon. For all her psychopathic tendencies, her razor-sharp, bitchy observations and her disdain for certain aspects of human relationships and everyday life, she really could do with a friend.
In Bloom is Bridget Jones meets American Psycho. However, I would recommend reading Sweet Pea first as there is quite a lot of reference to murders and characters from the first book.
I would not recommend either book to those easily offended, squeamish, prudish or with a powerful sense of morality. I am now twiddling my thumbs, waiting for book three.