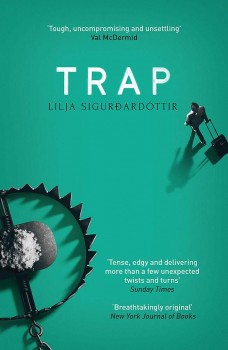 Sonja is tucked away in Florida with her young son and hopes that she has escaped her violent ex-husband who also manipulated her into smuggling cocaine. But soon the idyll is shattered as she’s forced back to Iceland, pushed into more drug trafficking, and forbidden from seeing her son.

Sonja Gunnarsdottir and her young son Tomas are in Florida. Theirs is not an ordinary stress-free holiday as she’s on the run from her ex-husband Adam who got sole custody of the boy after discovering Sonja and her lover Agla in the family bed, and whose manipulation forced her to become a mule in smuggling cocaine from European countries to Iceland. But the two-month freedom abruptly comes to an end when Adam tracks them down on a beach and brings them back home.
Sonja is devastated as she’s not only forbidden from seeing her beloved son but also cannot escape the drug lords she thought she had managed to avoid. As another smuggling trip must go ahead, she has an unusual ally: her former nemesis Bragi, an airport customs officer who’s nearing retirement and who is very interested in getting a cut of the profits from her trip to ensure round-the-clock care for his dying wife Valdís.
Sonja tips off Bragi who catches two smugglers but in the process he also upsets the delicate balance of power and infuriates Adam. Although Sonja would happily destroy her ex, she realises that there are consequences of her actions, and she needs to get into the heart of the evil pulling all the strings. Tiger from Snare makes a loud appearance and so does sinister Mr José whose wife Nati becomes a new ruthless player on the scene which continues tightening the trap around Sonja.
Meanwhile, Agla awaits sentencing after her money laundering on a massive scale and involvement in other financial crimes at the bank where she had worked with Adam. She misses Sonja and hopes that the they will be able to get close again. Also, as she is indebted to some extremely powerful men, she starts a new deal moving money between companies and countries to save own skin.
International settings add exhilaration to the frankly terrifying encounters that Sonja must deal with, but Mexican funeral fiesta or London luxury make no impression on her, other than reinforcing the feel of complete imprisonments within the agreements and murky deals set up by brutal controlling criminals. All she wants is just to be an ordinary mother, taking care of her child, and not turning into some new kingpin. Or a queenpin.
The second instalment of Lilja Sigurðardóttir’s gripping Reykjavik trilogy increases levels of tension to the maximum. Short chapters switch between the main characters involved in the drugs charade. The author gives plenty of background information for each person and provides possible reasons as to why people must cross the line, including Maria, an ambitious investigator from the special prosecutor office.
Trap is populated by strong women in various capacities, all of them fighting to carve out a slice of action and respect from men, even if everything is far too complicated, dangerous and illegal. The book delivers quite a feminist message in a confident, assured style.
Lilja Sigurðardóttir does passion, murder, fury, anger, super-complicated financial machinations, brutal violence and constant fear. She delivers a timeless crime thriller perfect for the dark modern times. There’s a first-rate translation by Quentin Bates who clearly enjoyed turning snappy sexy Icelandic writing into an equally exciting English version.