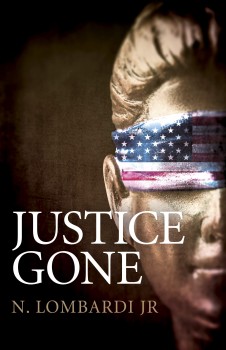 When ex-marine Jay Felson is beaten to death by police, someone shoots three of the officers involved and suspicion falls on Felson’s buddy Donald ‘Shortstop’ Darfield.

The returned war veteran is a frequent icon in American crime fiction, and in Justice Gone veterans feature in a story which is maybe closer to reality than most. It begins with the brutal beating of a loitering homeless man, a veteran of Iraq, which ends in his death. The police involved have no justification for this violence, and when a video of the event is leaked to the press there is a public outcry.

The reaction is such that the three officers primarily responsible are fired, but for someone such a punishment is inadequate. All three are shot and killed the same day by a marksman using custom-made military rounds. On very thin circumstantial evidence, the police have Felson’s close war buddy Donald ‘Shortstop’ Darfield in the frame, and after a brief stand-off arrest him and charge him with triple murder.

The book them follows the trial process in detail. Shortstop is black and the prejudice against returned veterans, especially those of colour in a predominantly white district, makes it unlikely he will get a fair trial. Luckily he has the services of Bodine, a lawyer who is himself a veteran and blind from an incident in Vietnam, but canny in the operation of jury trials.

The author builds the story around Dr Tessa Thorpe, who is due to appear in further books in a promised series. Thorpe is senior therapist at a trauma recovery clinic and close to both the murdered man and the one accused of the act of vengeance. Tessa at some stage is half-persuaded that Felson’s father, and then fellow counsellor Casey Hull, both veterans with sniper training, could be responsible for the shootings.

In truth, though, as a protagonist Tessa is rather overmatched by Bodine, who proves himself a master in court and repeatedly wrong-foots the smug deputy DA Fiske, who is prosecuting for the state. The courtroom action is excellent, trimmed to the most gripping parts of the trial, with plenty of emotional impact and several unexpected revelations. Bodine’s expertise and the paucity of the state’s case do not, however, guarantee an acquittal. The jury discussions exemplify the thesis that the conclusions drawn are primarily dictated by the preconceptions of the individuals concerned.

The latter is just one facet of what feels like a fairly realistic portrayal of the way small-town US society works, from the nervousness about returning veterans and their disruptive influence back home, to the cynical treatment of the initial incident by the local council, the widely-held belief that the police should be supported whatever their faults, the theatre of the court, and above all the way veterans damaged by their experiences are treated.

What you get here is both a thought-provoking picture of how life operates in a fairly influential part of the world, wrapped up in a fast-moving story with plenty of dramatic moments, and a big twist in the final pages.