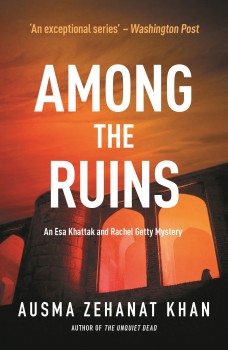 Canadian policeman Esa Khattak is on holiday in Iran when he receives an unofficial request to investigate the murder of a political filmmaker.

This is the third book in a series featuring the head of Toronto’s Community Police Unit Esa Khattak and his subordinate Rachael Getty. Unlike the first two, their latest adventure takes them away from home. The book opens in Iran, where Khattak is taking a holiday after the strains arising from their last case battling an Islamic terrorist.

Events interrupt his tourist activities: Sobhani, a Canada-based filmmaker of Iranian origin who’s critical of the regime, is arrested outside an Iranian jail where she is protesting against her daughter-in-law’s incarceration. When she’s murdered while in custody. Khattak receives notes from a local dissident, and is contacted by Touka Swan, apparently some sort of Canadian agent, and feels obliged to investigate why Sobhani was so bold as to visit Iran when she was likely to face hostility from the government.

Khattak calls Getty in Toronto and asks her to make enquiries about Sobhani’s movements prior to her departure for Iran. Khattak himself makes contact with the Green Birds, a small group of young dissidents who risk torture and death by campaigning for greater freedom. The pair approach the problem in both jurisdictions and exchange discoveries, eventually uncovering what Sobhani was up to.

Their findings provide an opportunity to defeat the activities of an evil person working entirely in their own self-interest, but only with circumspection and considerable luck. Getty flies to Iran to assist Khattak but even with the pair working together they run severe risks of ending up as victims of brutal agents of the regime.

The action in Iran is set against a backdrop of some of the most attractive parts of the country, spectacular architecture and temples, palaces and gardens which sound even more exotic for being so problematic to visit. Much of this fabric is the residue of ancient dynasties so far removed from the present day as to sound like fiction, or something conjured up by poets, so revered in Iran.

The political atmosphere makes a striking contrast. The book begins with a seven-page timeline of modern Iran for those unfamiliar with the developments which led to the current religion-dominated state, replete with occasions of democratic reform snuffed out and the largely malign hand of foreign interference. The book gives no hope of an early fulfilment of the widespread hopes for greater freedom but does highlight some surprising facets of the country which belie its image abroad.

I was critical of Khan’s earlier two books as being somewhat feverish in tone, and I am glad to report that in her latest the leading characters are more stable. Getty has re-established contact with her brother; Khattak remains a babe magnet as ever but is managing to stay clear of grief over misbehaving siblings or ex-partners. The pair certainly stay cool during the thrilling final part of their activities among the ruins.