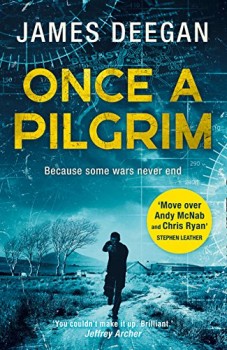 Former SAS hard man John Carr is now working in private security, his army days behind him, or so he thinks, but some wars never entirely end, as events early in Carr’s military career come back to haunt him and his former comrades.

It’s a classic reviewers’ cliché that having come late to a series we often promise to go back to the earlier books, but the constant additions to our ever-tottering to-be-read piles often gets in the way of that aspiration. Not so in this case. James Deegan is the SAS new kid on the block and I really enjoyed The Angry Sea, the second book to feature former Regiment hard man John Carr, and on this occasion I really did go back to read Deegan’s debut, Once a Pilgrim, and certainly didn’t regret my decision.

Carr has put a long military career behind him and is now working as head of security for a Russian billionaire in London, but the past, in this case Carr’s service in Northern Ireland during the Troubles, comes back to haunt him with a vengeance. In this case, a very literal vengeance born out of an incident when Carr was a paratrooper fighting a deep-seated and bitter war in the north. Three Provisional IRA men were killed, two shot and killed instantly, the other death more drawn out. An investigation cleared the men concerned of a charge of allowing the third man to die by delaying calling for an ambulance, and everyone concerned thought the incident was behind them, but hatred of the British forces runs deep, memories are long and opportunities for revenge are rarely passed up.

When an old friend and comrade is murdered, John Carr isn’t the sort of man to just walk away, especially when it looks like he and his own family are likely to come under threat. Carr’s former wife still lives in Northern Ireland and his son George, also in the army, is about to go for Selection as well, in the hope of following in his father’s footsteps. Despite their break-up, Carr remains on good terms with his wife.

Loyalty means a lot to Carr; it was a way of life in the army, and he’s the same now in his new career in private security. He’s prepared to act decisively and ruthlessly when needed, but the question Carr now faces when his own life is under threat, as are the lives of his family, is how many lines he’s prepared to cross to keep them safe.

As this fast-paced, meticulously depicted military thriller develops, Carr doesn’t simply cross lines, he drives an armoured personnel carrier through them at speed and it all makes for an extremely good read that carries the sharp edge of authenticity, drawn no doubt from the author’s own experience of army life and his time in the SAS. There’s enough military detail to make it clear that Deegan lived and breathed army life for over 20 years, 17 of them in special forces, but never too much that the story mires in a sea of acronyms.

There are scenes that made me want to look away, but I wasn’t left with a feeling of discomfort at gratuitous violence, although there is certainly plenty of action. Instead the chill came from the perfect depiction of what life was like before relative peace came to Northern Ireland after decades of sectarian conflict and the uncomfortable knowledge that this hard-won, fragile state is now being put at risk as British politics descends even further into a dangerous farce.

The characters are always well-drawn, from Carr himself, a hard-bitten street fighter turned into a very effective killer by the army, to the urbane Guy de Vere, who started his army career with Carr on the lawless streets of Belfast and is now Director Special Forces. The two men share a bond forged under fire, each illustrating two very different faces of the British army – the tough, experienced NCO and the wet-behind-the-ears officers who rely on them to survive their early days in command. Former terrorist-turned-politician Pat Casey is equally convincing, and I felt all the ambiguity towards him that I felt towards Gerry Adams and Martin McGuinness in the latter days of their careers.

Once a Pilgrim and the second John Carr thriller, The Angry Sea, amply demonstrate that the newcomer in the SAS stable has everything it takes to join Andy McNab and Chris Ryan on the book circuit.