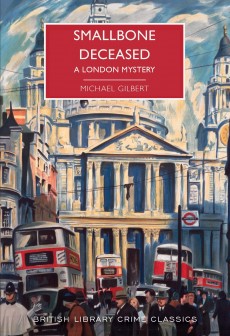 The London legal firm of Horniman, Birley and Craine suffers a blow to its reputation when a client is found dead in an office deed box.

This is a traditional crime novel first published in 1950, and now re-issued as a British Library Classic with an introduction by Martin Edwards. The author, Michael Gilbert, worked as a solicitor at Lincolns Inn for some 30 years and wrote 30 novels as well as 185 short stories, making a significant contribution to the crime genre.

A legal firm that numbers amongst its clients some of the highest in the land becomes the target for gossip when Marcus Smallbone is found several weeks dead in one of the firm’s hermetically-sealed deed boxes. Smallbone shared the duties of trustee for a major trust with one of the partners, Abel Horniman, in whose room the body was found, and who had died himself of cancer a few weeks before the discovery.

Chief Inspector Hazelrigg of Scotland Yard is assigned the case, who is lucky enough to have an assistant on the spot: the newly recruited H, B & C employee Henry Bohun. Hazelrigg has heard enough about Bohun and his capabilities in a wide range of fields to recognise that his insights could be of great assistance.

Hazelrigg suspects money has played a part in events and arranges for a thorough scrutiny of the accounts over which Horniman had control. Some irregularities are found, but Horniman was latterly quite weak and would have been unable to murder anyone himself. Several others might have had motive, including Horniman’s son Bob, who has inherited the largest share in the business.

Although the precise date of death is difficult to determine, the busy weekday activity in the office narrows the day of the murder (Smallbone had been strangled) to a Saturday, when only a skeleton staff would have been working. An investigation into the likely weekend in question is under way when a second murder occurs. With both Hazelrigg and Bohun working on the case, it is only a matter of time before the culprit is identified.

The minutiae of office life circa 1950 and the life of the upper middle classes are well depicted here: Horniman dressing for his solitary dinner every day at home, the stratification in the venues at which office staff lunched, from the partners’ clubs to the senior typists at a Lyons Corner House, and the sexist way in which the typists are characterised as silly and hysterical. It is difficult not to speculate on how times have changed, whether you think that an improvement or not.

The two investigators are interesting, especially Bohun, who appears in some other of Gilbert’s stories. He sleeps very little and makes use of his extra time by obtaining qualifications for a range of professions, working as a night watchman, and when not otherwise engaged making use of his extensive home library. He has a bit more to him than your usual detective.