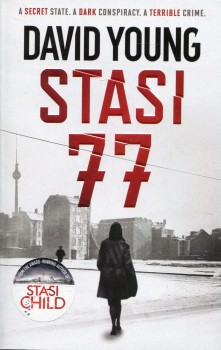 Major Karin Muller of the Volkspolizei is called back from leave to investigate a murder in a state cotton mill, but soon finds that the Stasi have an interest and are determined to block her progress in the case.

This is the fourth outing for Karin Muller, a major in the East German State Police Serious Crimes Department. It is 1977, and she is taking a holiday with her 17-month-old twins and her grandmother when her superior calls her back in to deal with a suspicious death from smoke inhalation in the southern city of Karl-Marx-Stadt.

From the beginning the Ministry of State Security, the Stasi, block several lines of investigation, and when Muller establishes a link with similar deaths elsewhere in the country, she is taken off the case entirely. The two officers she works with, Tilsner, her second in command, and technician Shmidt, are acting strangely and clearly not to be relied upon.

However, Muller is nothing if not dogged, and although supposedly back on leave pursues a few leads which establish a link to certain wartime events, and to a visiting Frenchman whose entries to the country correspond to the dates of deaths under investigation. Despite the risks of her quest she pushes on until she has a full explanation of events.

The story of her progress is interrupted by the harrowing tale of three French brothers, arrested for wartime resistance activities and taken for slave labour in the subterranean plant at Nordhausen making V1 and V2 weapons. By April 1945, with armies approaching from both east and west, the brothers are with a thousand others on a death march, culminating in death for most.

As usual, the author blends the travails of his fictional heroine with a realistic portrait of a society now thankfully consigned to the past. The Stasi comes across as a very blunt instrument of state policy. The wartime scenes draw much from real events, as the author discusses in a note at the end. The number of Nazis in positions of influence in Germany after the war always shocks.

Major Muller presents the usual problems. Her grit and determination to get to the bottom of things is as impressive as ever, especially when colleagues with whom she has been very close crumble so easily and leave her unaided. At the same time her girl-scout attitude can be irritating; in practically every episode her family comes under threat to bring her into line, and she never sees it coming.

Quibbles aside, however, the series continues to entertain, with a gutsy protagonist fighting a sinister obstructive bureaucracy which can be relied upon to impose maximum opposition. Muller’s frustrations reach a crisis at the end of the book – and the final question to be answered is whether she will be coerced into remaining in post.