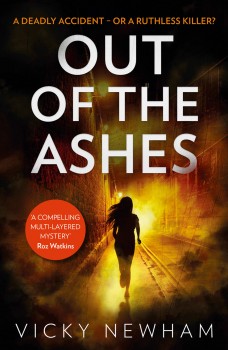 Out of the Ashes

When a fire turns out to be arson, DI Maya Rahman heads the investigation into two deaths, and strongly suspects there might be more to come.

Rosa Feldman was standing at the door of her newsagent’s shop on Brick Lane when she heard music and saw people starting to dance in the street. She can’t resist joining in when the crowd swells around the dancers, but then the fun is interrupted by the sounds and smells of a fire, and soon smoke is billowing everywhere and Rosa collapses, bringing her enjoyment to a sharp end.

DI Maya Rahman is called to the scene of the fire. It’s immediately obvious that it’s serious, and that there might be someone inside the flat above the burning shop. The fire is intense and it’s a while before the fire crews can see inside the burnt-out shell. A report of two bodies, curled around each other, horrifies Maya, but there’s an added complication, as according to one of the tenants of the trendy soup shop, there should have been only one person in there, Simon Gudelis, a Lithuanian. His girlfriend, Indra Ulbiene, collapses in the street and is rushed to hospital where, to add to the tragedy, she suffers a miscarriage.

The fire crew is certain that the fire was deliberately set, as there was a strong smell of accelerant at the scene, so as well as arson, Maya is also looking at a double murder. It seems that the flash mob might have been a deliberate distraction. For Maya, this case is more personal than usual as she grew up around Brick Lane and used to buy sweets from the Feldmans’ shop.

I enjoyed Maya Rahman’s first appearance in Turn a Blind Eye and was keen to see where Vicky Newham would take her main character next. She’s still working with DS Dan Maguire, who joined the force from Australia and is still hoping his wife and children will soon join him, although that hope seems to be receding as the book progresses.

Maya is refreshingly free of the heavy baggage that seems to weigh down most male protagonists these days, but she’s not entirely free of troubles, as he dad walked out on his family many years ago, and Maya has always believed him to be dead, but a photo taken at the funeral of Mrs Feldman’s husband forces her to question that belief. Much to her surprise, it seems that her father might still be alive.

Out of the Ashes is a polished police procedural with an excellent cast, refreshingly strong on diversity. The Brick Lane setting and the creeping gentrification of so many areas in London is well-handled, bringing out the tensions inherent in societal change. Rosa Feldman is an old woman who refuses to countenance moving out of her dilapidated, damp shop, despite the urging of her son and daughter. The landlords are keen to take the property back and develop it, but Rosa has no intention of obliging them, even though she can see that there is little future for a shop like hers. As the investigation progresses, Maya become increasingly concerned for Rosa’s safety as she wonders if her shop might be the next to be targeted.

Newham has an enviable knack of bringing her characters alive on the page and making them likeable – something that eludes all too many crime writers. I like the strong bond Maya shares with Dan and the rest of her team. There’s plenty of tension in the investigation, but Newham avoid the need to ladle on the angst and makes the book’s selling point a strong cast and an intriguing storyline. The sub-plot regarding Maya’s family backstory is equally interesting but never slows down the main action.