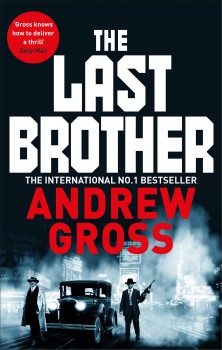 Morris Raab fights his way up from a poor New York East Side upbringing to be a major player in the rag trade, but gangsters are determined to take a slice.

The author acknowledges at the end that this work of fiction is built around the true story of his grandfather, a first-generation Jewish immigrant who, from lowly beginnings in the Lower East Side, becomes one of the largest New York garment manufacturers. Morris Rabishevsky, who adopted the name Raab, is the youngest of three surviving brothers. He began work at 12 and within a few years is running a major production works.

Rampant capitalism in the US demands worker protection by means of combination, but by the 1920s trades unions are being taken over by gangsters like Louis Buchalter, who Morris knows from childhood. Employers in the garment trade have no option but to make contributions which the workers never see and are obliged to source raw materials from nominated suppliers whose prices are uncompetitive. Resistance is repaid by stink bombs, acid, arson and, ultimately, violence or death to the owners.

Morris has links to the gangsters behind such activity; he rubbed shoulders with them in his youth. His older brother Harry, forever haunted by the guilt he feels for the accidental death of his twin brother Samuel at the age of six, can never settle to regular work and hangs around with the gangs, always at risk of being drawn into criminal activity. These connections, and his tough reputation, give Morris protection for a time, but eventually a confrontation becomes inevitable.

The rags-to-riches story has been told elsewhere but Morris’ rise is inspiring; early 20th century New York was a tough place to make a living and anyone who made it to the top is worth studying, especially when they did so by being fair to others. Interestingly, most of his siblings also made something of their lives and given their initial disadvantages, you can’t help thinking that these days there are few who could match up.

The picture of the gangsters is not the central focus but what we do see is comparable in quality to the tales of Lehane, Dexter and others who specialise in the subject at the same period. Harry is slightly reminiscent of Fredo in Puzo’s The Godfather, the weak brother who hangs around gangsters, picking up the crumbs which fall from the table and liable to accusations of betrayal. Harry, though, has his own standards.

The whole makes for a gripping tale. Early 20th century New York was a tough place to be, and the early struggles of the Rabishevsky family and Morris’s fight to resist intimidation makes him stand out against his contemporaries. In his subsequent battle with Buchalter and his gang he displays great bravery, some would say foolhardiness, but this was a man incapable of giving in to threats.