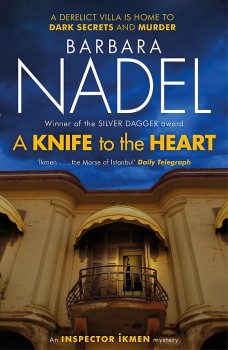 A Knife to the Heart

Cetin Ikmen has fallen into depression after his retirement and his wife’s accidental death, but he’s reinvigorated when he is asked to investigate a case long gone cold.

After 20 books detailing his cases as a detective in Istanbul, age and a new incompatible boss have brought Cetin Ikmen’s official career to a close. The loss of his beloved wife in a traffic accident has compounded his loss of interest in life, and his family and friends are showing concern.

They are therefore relieved when after a year in which Cetin barely left his flat, he is reanimated by a request to re-investigate the death of a daughter from a military family, killed 40 years ago by a knife to the heart. The Tongue family at that time lived in a historic wooden house, but have been displaced since the head, a once-powerful admiral, was arrested on suspicion of involvement in the July 2016 coup against the president.

Ikman can rely on the unofficial support of his old colleagues, including detective Mehmet Suleyman. Suleyman and his staff, though, are busy with a different case, a young woman found strangled in another old house. The property in question, like that formerly owned by the Tongues, is run-down and rapacious businessmen are eyeing it with a view to replacing it with glass and concrete apartments for the rich. The owners hide behind front men and are happy to see the building used by prostitutes and drug users – all the better to justify early clearance.

Reports on the progress of the detectives is broken by a third storyline, this time featuring Imam Denir, a tailor, who is approached by a man claiming to be a friend of his father, a thief who has been dead for many years. Denir has mixed feelings about his father and he finds the ‘friend’ to be a great deal better-dressed that his father’s companions were wont to be.

The story is carried forward by brief scenes a page or two in length, moving between various characters. This can call for some mental agility from the reader, especially as there are 42 persons listed in the cast list provided. That these are all foreign names with unfamiliar punctuation doesn’t help either.

But for those not put off by these complications, there is plenty to enjoy here. Barbara Nadel fully exploits the potential of Istanbul as an ancient city with secrets around every corner. Obscure sects and beliefs abound, some relatively minor deviations from orthodox mainstream Islamic or Christian dogma, others quite bizarre, survivors from enclaves around South-Eastern Europe or the Middle East displaced by old or current wars.

This diverse mix of people got along reasonably harmoniously before today’s new orthodoxy arrived, and there are many like Ikmen and his friends who regret the passing of a more tolerant society. Their understanding and expertise enable them to unravel the complicated crimes they tackle and help to explain the workings of what is surely one of the world’s most exotic cities.