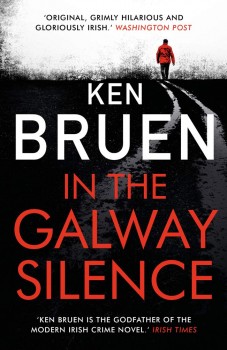 In the Galway Silence

Former cop-turned-PI Jack Taylor is pitted against a vigilante assassin who uses the name ‘Silence’ – and the clash quickly becomes personal.

A confession. I raced through the 14th Jack Taylor story from Ken Bruen, Ireland’s godfather of noir, in about three hours – then went back and read it again!

Bruen is one of Ireland’s most original voice in crime fiction, with his stunning, poetic look at the shadowy side of life. His precise, skeletal, yet strangely lyrical prose, unorthodox wordplay, dark-as-sin humour and wonderful evocation of the country and its people have carried this long-running series to triumph after triumph.

And In the Galway Silence is no exception – in my opinion it’s probably his best yet!

His hero is that classic figure of an ex-cop turned seedy private eye – an Irish roughneck and a man with bad habits, who somehow does good despite himself. Much of the reader’s pleasure comes from listening to his eloquent rants, studded with references to current events, songs and books. Dark like the pints of Guinness this tortured, pill-popping antihero consumes on a daily basis, Taylor is a deeply flawed but endearing character with a somehow always hopeful wry and bittersweet voice whose suffering is both tragic and transformative.

As the story opens Taylor believes he may have at long last found contentment after too much tragedy and violence. He has a new woman in his life, a new apartment, and the only sign of trouble on the horizon, is his girlfriend’s spoilt, brattish and wilful nine-year-old son.

But once again, trouble finds him, in the shape of mega-rich Frenchman Pierre Renaud, who made as fortune as a hedge fund entrepreneur in the Celtic Tiger years and had the sense to get out before the crash reduced Ireland to an impecunious vassal of the European Bank. Renaud demands Taylor investigates the double murder of his twin sons – a pair of entitled, drunken, drug-addled enfants terribles who died bound to a wheelchair, their mouths superglued shut and pushed off the pier adjacent to Galway’s Spanish Arch.
Taylor reluctantly agrees to investigate, but his inquiries open a door to his troubled past and confront him with a deadly new threat, a vigilante assassin who uses the name ‘Silence’ – something he brings to an expanding circle of targets, clients and those, like Taylor, who get in his way!

What follows is a veritable smorgasbord of murder, vigilantism and pandemonium, broken by some foot-of-the-gallows humour and repartee. This fast, funny, cleverly plotted and hard-hitting story fashioned around the moves of a chess game, and powered by non-stop action and acerbic wit, is Bruen at his very best. It’s stripped of unnecessary detail or action and never fails to deliver a solid, often quite devastating impact.

Don’t worry if you’re new to Taylor. The author has developed a technique of letting the reader know what they need to about his past in a very few words. And it’s his character, his gift for blarney, smartass asides, plain speaking, poetic melancholy – and downing shots of Jameson’s, always without ice – which drive this dark and brutal story.

It’s written in Bruen’s inimitable and unmistakable style with pregnant short, often one-word paragraphs which more closely resemble verse than prose, and captures the defining spirit and mood of this period of modern Irish history through its ideas and beliefs coupled with a noir-styled melancholy.

At his most darkly humorous, his most lovably bleak, this latest sad, self-destructive, justice-seeking episode in the life of Jack Taylor is best illustrated by a proverb Bruen seems to have invented to make his point: ‘The Irish can abide almost anything save silence.’ In the Galway Silence is quite brilliant – and top of my list for book of the year!