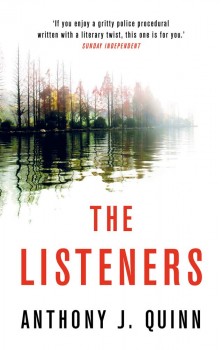 Newly appointed Detective Sergeant Carla Herron is called to a psychiatric hospital after a patient confesses to murdering of one of the psychotherapists. His confession is detailed, but impossible, as he was in a secure ward under 24-hour surveillance.

No-one does atmosphere and menace better than Anthony J Quinn. One of the best of a coterie of Irish crime authors, at times his backgrounds offer a melancholic threat of their own which leads to comparisons with the great American author James Lee Burke.

Like Burke most of his stories are set in the semi-wild. Burke has his Louisiana bayous. In his brilliant Celsius Daly series of procedurals, Quinn chose the near-wilderness of the shores of Lough Derg – a place of rain, mist and fogs, of failed ventures and shattered dreams, where almost anything seemed possible.

Now, introducing a new character, he has switched to the other side of the Irish Sea, to the historically blood-soaked, bleak uplands and dark forests of the Scottish borders, to produce a gritty, powerful and at times frightening procedural featuring a clever adaptation of the traditional locked-room mystery.

Newly appointed Detective Sergeant Carla Herron is called to a Borders psychiatric hospital after a patient confesses to murdering of one of the psychotherapists. His confession is detailed – but completely impossible – as he was locked in a secure ward under round-the-clock surveillance!

As Carla, a fast-track promotion product of Edinburgh’s police college, struggles with her first major case, she discovers that other patients have made disturbingly similar confessions over the past year. In a bid to dig deeper into why the allegedly murdered psychotherapist has disappeared, she uncovers a culture of jealousies, lies and even hallucinations among the secretive hospital staff.

In a beautifully written narrative and with foreboding darkness almost rising from its pages, Quinn explores the themes of secrecy, lying, duplicitous behaviour and untrustworthiness through his characters with plenty of misdirection and red herrings for anyone trying to unravel the mystery concealed within what is a Russian doll of manipulation inside manipulation. And he does not shy away from the possibility of doctors exploiting their privileged position to play God with the lives of their vulnerable patients.

Quinn’s writing and pace are immaculate, his characters well-drawn. It may take the reader a while to warm to Carla, who switched careers from teaching to the police. She’s sometimes a little too eager, but has potential and her willingness to work hard, her tenacity and her wish to learn from more experienced investigators such as the monosyllabic and brooding DI Morton, mark her as one on the up.

Still, it’s hardly surprising that she is having problems with her stay-at-home husband who looks after their two children, a nice – and undoubtedly realistic – counterpoint to the seriousness and moral duplicity of the investigation.

This masterful novel is a must-read for those who enjoy intelligent crime fiction and its breath-taking settings of the dense pine forests and lochs provide a near-Gothic backdrop to a story that has a distinctly chilling vibe and a rich, intricate plot.