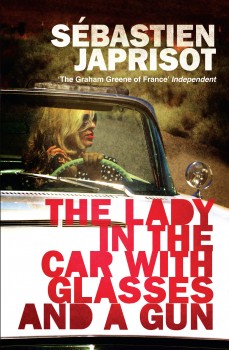 The Lady in the Car with Glasses and a Gun

Dany Longo borrows her boss’s Thunderbird to leave Paris for a trip south, but a liberating trip to the coast becomes a nightmare when strangers along her route assure her that they have already met.

Dany Longo works at a Paris an advertising agency; a beautiful blond, her upbringing in the care of nuns and her extreme short-sight have made her somewhat retiring. At her boss’s special request she performs some additional typing at his home before he and his family fly off for a holiday; Dany drops them at the airport in his wife’s gleaming white Thunderbird.

On a whim Dany sets off south in the car, deciding for once to blow her limited funds on a few days pleasing herself. Things take a strange turn, however. Wherever she stops she runs into people who claim to have seen her the day before, when she was back in Paris. They remember the car, Dany’s name, her appearance and what she was wearing. Stopping at a service station she is briefly assaulted, and thereafter even the bandage she wears over a minor wound forms part of these recollections.

At first ,she takes this as a case of mistaken identity, although the unusual type of car and the specificity of the memories make this very odd. As the evidence increases, however, Dany starts to doubt her own sanity. Things take a distinctly sinister turn when a body and a gun turn up in the trunk.

Going to the police is something she is reluctant to do; strictly speaking, she has stolen the car, and her involvement in a murder seems at this point to be so well documented as to be undeniable. Dany is going to have to throw off her fears and do some thinking to find out what has been going on.

This cult French classic was originally published in France in 1966 and is now being re-issued in translation. It is written in the first person throughout, narrated mainly by Dany, who we come to understand quite well. She is self-effacing, and often surmises that others regard her as they might a piece of furniture. Her confusion about what is happening is understandable and she shows admirable resilience in the face of what would be enough to reduce many to helpless acquiescence in her fate.

While the writing has an excellent style which is ahead of its time, the story bears unmistakable marks of its setting and period which give it special interest. The book comes with an introduction setting Japrisot’s work in context, several of which feature perplexed protagonists who find ways to put back together the ‘cracked mirror’ that he devises to confuse them.