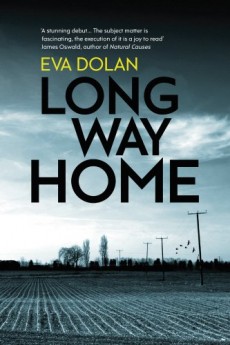 Long Way Home is a police procedural set in the flat lands around Peterborough, where the high immigrant population is the cause of tension with locals. The immigrants’ hopes of good jobs and wages are however rarely fulfilled, with unscrupulous exploiters always ready to take advantage.

Against this uncompromising background a man is found burned to death in a locked garden shed, identified as one of the immigrants using outbuildings as temporary accommodation. Detective Inspector Dushan Zigic and Detective Sergeant Mel Ferreira of the Peterborough Hate Crimes Unit are called to investigate. Suspicion initially falls on the couple who live in the adjoining house, but they refute the accusation. The dead man had arguments with a local ganger/landlord, but he too denies any responsibility. Progress is slow, but when another immigrant is found dead it seems the case may be part of something with major significance.

Eve Dolan leaves few illusions as to the nature of the natives hosting the immigrant influx. If they are not actively marching or spray-painting graffiti protesting against it, they are participating in exploitation while simultaneously complaining. A significant minority are trading in the worst ways imaginable upon the weaknesses of recent arrivals, who because of unfamiliarity with British laws and institutions, poor English and lack of friends are under-equipped to protect themselves. Distribution of copies of this book in Eastern Europe may be helpful in reducing the immigration about which we hear so much.

Investigating police Zigic and Ferreira know and understand the prejudice they seek to combat: although born in Britain they have both faced bigotry and there is no question about their determination to find answers. Both emerge as distinctly different personalities, Zigic slower to judge and carefully evaluating witnesses for veracity, Ferreira with a nose for evasion and putting the pressure on to force admissions. Their unit is small and, in a time of cutbacks, under pressure. All this, the long hours, the demanding senior staff and the competing rivals form a convincing picture of operations in a provincial police centre.

This is very assured for a debut novel and there is much to admire about the way it builds compelling detail. The initial frustration of the two protagonists at the lack of progress generates a tension which is released as new findings enable rapid action, carrying the story to an exciting and satisfactory conclusion. We are promised a new crime series of which Long Way Home is the first, and if the standard is maintained at this level Eva Dolan will soon be a recognised name.