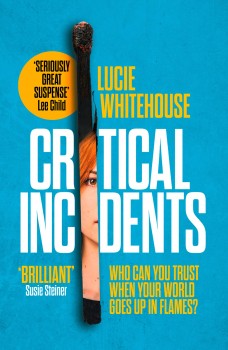 Former Met detective Robin Osborne is back on her own turf, working as a benefit fraud investigator, but when her best friend’s husband goes missing, Robin refuses to believe that he could have harmed his wife and son, and is determined to take a hand in matters.

Robin Osborne is at a low ebb. She’s been dismissed for misconduct from the Met’s Homicide Command and has been forced to return to her parents’ home in Birmingham, much to her teenage daughter’s disgust. The pair are now sleeping in bunk beds in a small room and Robin is working as a private investigator for an old friend who does a lot of benefit fraud work. The phrase ‘how the mighty are fallen’ could have been coined for Robin. Oh, and to make matters worse, she doesn’t exactly get on well with her mother, which is just the icing on a shit sandwich rather than a cake.

The only person who seems happy to see Robin is her former best friend Corinna, but trouble follows Robin like a bad smell, and when Corinna is found dead and her young son is badly burned in a fire, suspicion falls on her husband, who’s nowhere to be found. The local police seem convinced he’s the guilty party, but Robin stubbornly refuses to believe that her old friend is capable of murder and arson, and is determined to involve herself in the investigation, whether she’s wanted or not. And, as if that wasn’t enough to be going on with, she also decides to start looking into the disappearance of a young woman.

Critical Incidents is one of those books that I enjoyed, despite at times wanting to throw it out of the window! I alternated between feeling sympathy for Robin and wanting to yell at her not to be so bloody stupid. She’s headstrong – and that’s what got her fired from the Met – and seems quite capable of repeating her mistakes without any understanding of why other people get frustrated by and furious with her. But she’s also a woman who’s just trying to do her best for her daughter whilst not wanting to hook up with a bloke just to make her life easier. She’s a loyal friend and a tenacious investigator, and that’s what makes her work as a lead character. She’s someone you’d want watching your back in a tight spot.

Luci Whitehouse does a good job of capturing the flavour of Birmingham, a sprawling multi-racial city that is both loved and loathed by its inhabitants, and it’s hard to forget comedian Jasper Carrott’s famous comment that if the world had piles, that’s where they’d be! Robin’s ex-boyfriend, Samir, is the officer in charge of the investigation into Corinna’s death and her husband’s disappearance, and I have to say that my sympathies were with him over some of Robin’s antics. Despite my feelings about her, I enjoyed being along for the ride as Robin careered around her home city like the proverbial loose cannon.