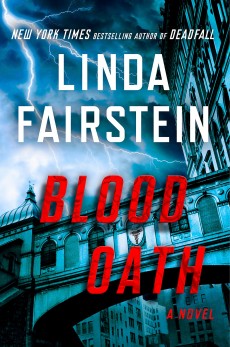 New York Assistant DA Alexandra Cooper gathers evidence for an accusation of rape of a minor but finds both the victim and herself in danger.

This is the 20th outing for Assistant District Attorney Alexandra Cooper  – ‘Coop’ to her friends – now newly back at work after leave to recover from a kidnap. The two adventures while she was away, including the fatal shooting of her DA boss beside her on the courthouse steps, do not appear to have adversely affected her recovery. Her partner Mike and friends Mercer and his wife Vickee, cops all, remain close.

Given her focus on the protection of women and children, a young woman picked up on an old theft warrant is passed on to her when the woman, Lucy, claims that she was raped as a 14-year-old, some ten years ago. The man accused is a New Yorker of position and renown, and someone who will contest the charge very vigorously. His enthusiasm for a blood oath to pressure his victims is a particularly sinister feature of his modus operandi.

Meanwhile, Francie, a defence attorney who often crossed swords with Coop in court but is a good friend, collapses while on the way to Coop’s ‘welcome back’ party. It is some time before doctors establish that she is suffering from an attack by a deadly nerve agent, and she is transferred to a specialist hospital for treatment.

The author formerly had a very similar career to that of her protagonist, who comes across as extremely effective in her job, as well as being abrasive in a very New York in-your-face kind of way. She gets into arguments with practically everybody, although is ready to apologise when she cools down and realises she was in the wrong. Her competitive spirit is reflected in the long-standing rivalry between Coop, Mike and Mercer to find the final answer in the TV show Jeopardy!, with large bets riding on the outcome.

Fairstein manages as usual to drop in information on topics she thinks readers should know about. The nerve agent attack validates a passage featuring novichok, used in the Salisbury attack, possibly not so well known to Americans as to those in UK. She also reveals that FDR Drive in Manhattan is built on rubble from the wartime blitz in Bristol, to ballast ships otherwise empty after offloading supplies moved in the opposite direction.

Some may find Coop’s perspective a little too bound up with the bureaucracy of the DA’s office, and she doesn’t strike me as someone you would particularly want to meet. But after so many episodes, the Alexandra Cooper novels remain very readable, with a strong woman lead as a forceful advocate for all the right causes, and exciting confrontations with evildoers.