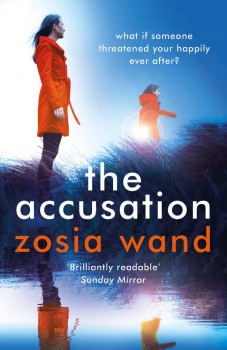 Eve must find out if her husband is lying, or she will lose her daughter.

Eve and Neil don’t resent their inability to have a baby of their own, particularly not now that all there is left for them to adopt Milly is a three-month settling period and a handful of formalities. The four-year old girl adores her new home in Tarnside, Cumbria. She loves her new mummy and daddy, although she has no intention of forgetting her biological grandparents, who brought her up when her own mother failed to kick her heroin addiction.
The next three months should be easy, but fate is sneering at Eve. Milly has gone. She has disappeared from their garden. Eve and Neil are terrified that someone has kidnapped her, and have no option – they must phone the police and involve social services.
Even though Milly returns safely, her adoption is now under threat, and Neil’s behaviour will be picked apart with tweezers. But this is just the start, because the woman who took Milly has her own agenda based on hate and jealousy. Her insidious accusations rock the very core of Eve and Neil’s marriage, and the woman will stop at nothing in the name of love.
I love a straightforward whodunit, but there is something deliciously and sadistically voyeuristic about psychological thrillers that rip back the pretty façade of family life. Perhaps it is enjoying the particularly vicious conflict that comes from close relations at war without feeling under personal threat.
The Accusation reeled me in from the first sentences. Wand’s writing style is subtly eloquent. She is observant, and her description is brief but distinctive, original and refreshing. Her dialogue is honed, a representation rather than regurgitation of reality. In short, this author has found her voice, and it is one I like.
The main characters are well developed, particularly Eve and her mother. Milly bounces around the page as a four/five-year-old should. Neil is somewhat flatter, but as this is in the first person, from Eve’s point of view, and much of her focus is on Milly and her mother, this is forgivable.  The other characters are tools and indistinct.
As much as I devoured this book, I will say I had a strong urge to slap Eve at least once per chapter. From the start, she came across as whingy and adolescent in her outlook. The more I read, the more I realised she really hadn’t got rid of her teenage attitudes and angsts. Which would be fine if she was in her 20s, perhaps, but this woman is in her 40s, and she has been with Neil, who she supposedly loves and has utmost faith in, for half her life.
Her mother is a domineering bitch, who most people would enjoy hating if not quartering over a naked flame. It comes to something when a four-year-old sees through someone and her adoptive mother doesn’t. I did struggle in places with how easily Eve forgave her mother’s perfidy and turned to her in every little crisis.
There is little suspense in this story, but it is not a plot that is about surprises; it revolves around people’s emotions, actions and reactions, and how one accusation, true or false, is enough to throw that formidable player, doubt, into the arena.
The Accusation is a great read from a fresh, assured voice.