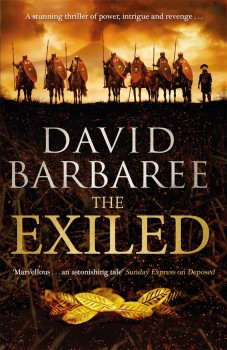 A series of dangerous power games are played out in ancient Rome against the threatening backdrop of Mount Vesuvius.

AD 79 is a date forever associated with the eruption of Mount Vesuvius that destroyed the ancient cites of Pompeii and Herculaneum, drowning them and many of their inhabitants in choking ash. What most people will have no idea of, though, is the devious power games being played out throughout the empire. Titus, now emperor following the death of his father Vespasian, is determined to retain his position, despite the threat posed by imposters claiming to be the deposed Nero, who committed suicide after he was deposed as emperor.

Rome isn’t the only empire undergoing upheaval. To the east, Parthia is in a no better state, as warring factions there struggle for possession of the kingdom. Parthian emissaries are expected in Rome imminently, so when a Parthian hostage, held in Rome for the past 30 years, is attacked and nearly killed, this makes Roman admiral, the renowned Plinius Secundus – aka Pliny the Elder – dig deep into the intrigues surrounding the Parthians, aided by his socially awkward, bookish nephew Gaius.

Sporting my grade A in A-level Ancient History, I very happily dived into the murky waters of Rome in the aftermath of the Year of Four Emperors and the murderous power struggles that followed the unpopular Nero being ousted from the imperial throne. AD 79 is a little out of period for me, but I know the basics. For anyone who doesn’t, Canadian author David Barbaree provides a handy dramatis personae at the beginning of the book which provides a handy reference throughout the labyrinthine complexities of politics in a period of upheaval.

The book is told from multiple points of view, starting with Zenobia, the former wife of struggling Parthian King Artabanus IV, and progressing through the eyes of Pliny’s nephew Gaius, the Parthian hostage Barlaas and Titus’ sister Domitilla. It’s to Barbaree’s credit that he gives each of his narrators a fresh voice as well as a different mantle to wear. I particularly liked Barlaas, still an outsider in the city where he has been held effectively captive for most of his life. His jaded, cynical sense of humour and tough attitude comes over well. Equally tough is Domitilla, engaged for the umpteenth time to someone chosen by her brother, and this time it looks like the wedding is actually going to happen. Her proposed husband is neither old nor ugly, so she’s not overly bothered, but then there is the matter of the Batavian slave who’s caught her eye…

Barbaree’s account of the eruption of Vesuvius that had such tragic consequences is frighteningly vivid, as the inhabitants of Pompeii and Herculaneum have to decide between hiding in their homes and hoping the walls withstand the earth tremors or braving the hail of pumice and grey ash falling from the sky. The Exiled reads like a missing chapter of the history and it’s not hard to buy into his version of events. I did check up on a couple of things where memory failed me and on every occasion, fiction followed fact. The only thing that threw me out of the story slightly were some transatlantic word uses, such as ‘bangs’ instead of fringe that I found hard to take, leaving me surprised that the book hadn’t been ‘Brit-picked’ for a UK release.

That’s a very minor point though, and overall The Exiled provides an entertaining historical romp around ancient Rome and its provinces, with interesting characters, a complex plot and bags of intrigue, leaving a number of ‘what ifs’ to linger in your mind after turning the final page.