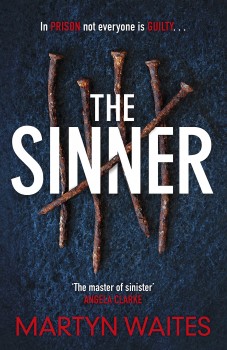 Tom Killgannon is asked to do one last undercover job, to get close to convicted child killer Noel Cunningham in Blackmoor prison and ensure he reveals the burial sites of his last two victims. He’s told the job will be straightforward. He was lied to.

Tom Killgannon used to be an undercover cop, but now he’s in witness protection in the depths of Cornwall. He works in a local pub and shares his cottage with a young woman who’s doing her best to repair her life after a history of abuse. The village is still struggling to move on from events in a previous book, which seem to have involved some sort of sinister cult, but it wasn’t hard to come to the book with fresh eyes.

When Tom is approached by the local police who want an undercover job doing, he turns it down. He doesn’t do jobs inside prisons. It’s too risky, even for him. But he succumbs to some unsubtle coercion and eventually agrees to be placed in Blackmoor Prison, where his job is to get close to convicted child murderer Noel Cunningham and get him to divulge where the bodies of his last two victims are buried.

Things quickly take an unexpected turn when Tom discovers that his past is about to catch up with him in a big way. With him in Blackmoor Prison is the gang boss Tom got close to in Manchester and helped put behind bars in the first place. Dean Foley is the reason Tom is in witness protection, and Tom can’t understand how the people who got him to agree to going undercover for a final time failed to realise that. And when Tom demands to be pulled out, he gets a nasty shock.

Martyn Waites puts his own background working inside prisons to good use in The Sinner. I’ve been a sucker for anything set in prisons since been weaned on Googie Withers in Within These Walls as a kid, and this psychological thriller certainly doesn’t disappoint. Blackmoor Prison looks and feels like its bleak and forbidding real-life counterpart Dartmoor Prison, and it’s easy to immerse yourself in the brutal, dehumanising regime contracted out to private industry, where men spend the bulk of each day cooped up in their cells doing their best to sleep their sentence away.

The story is cleverly constructed and well delivered. I ended up feeling more sympathy than I wanted to feel for convicted murderer Noel Cunningham, a man who never appears to have had a friend, and gangster Dean Foley, who seems almost ready to give up the idea of revenge and move on. There are some genuinely tense scenes both inside and outside Blackmoor, as events move towards an unexpected climax.

I also enjoyed the vibe of ordinary people doing their best to get out of a bad situation when Tom’s friend Lila and his boss from the pub, Pearl, are pitted against a ruthless assassin. I was cheering for both of them in some nerve-wracking scenes that never tripped over into the sort of territory where suspending disbelief becomes a problem. And I picked up a useful tip regarding hot, sugary drinks in a hostage situation!

The Sinner is a dark, atmospheric thriller with an intriguing backstory that makes me want to seek out the first book in the series, and I always know a book and its characters have worked for me when that’s the end result.