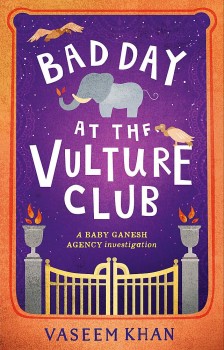 Bad Day at the Vulture Club

In the latest adventures of the Baby Ganesh Detective Agency, ex-Inspector Chopra and his friends investigate the murder of a prominent Parsee.

After several episodes in this charming series many readers will be familiar with Ashwin Chopra, an Inspector in the Mumbai police who has retired on health grounds, his wife Poppy, his deputy Rangwalla, and the baby elephant Ganesha he inherited from his uncle – in combination a formidable investigative force.

The latest story begins with the murder of Cyrus Zorabian, a prominent Parsee grandee, at the Towers of Silence where by tradition the dead of the community are left for disposal by vultures. Zorabian’s daughter is not impressed by the police conclusion that the death was a random act of violence and has called in Chopra to undertake a more effective investigation.

Chopra’s enquiries uncover discontent at the Towers of Silence, within Zorabian’s family, and at the Ahura Sports and Social Gymkhana, otherwise known as the Vulture Club where affluent Parsees meet. Zorabian’s expatriate secretary Buckley seems to have hidden secrets.

Meanwhile, Poppy is actively promoting a campaign to end the challenge of public defecation in India, named Poo2Loo, although her enthusiastic pasting of posters at her block of flats is not enjoying the support of Mrs Subramanium, the scourge of the residents’ association.

Rangwalla is also busy on behalf of a man whose daughter was killed in the collapse of the building in which she worked. The local municipal corporation, the BMC, had ruled that the building was unfit, and the owner is now imprisoned. However, an independent inspection prior to the collapse had suggested that the building was sound, and the release of the site for private development subsequently has added to the suspicion that there is more to the matter than was ever revealed in court.

As usual, energetic action by Chopra and his team facilitates rapid traction on all these problems. Zorabian leaves some cryptic messages which turn out to be code, and some Latin tags which he has been receiving from some aggrieved person, both puzzles which the reader can have fun trying to unravel.

The series continues to provide plenty of action and notwithstanding the humour that pervades every page the reader gets an education about the very real issues facing those living in one of India’s largest cities. We even get to find the origin of the depiction of an important person as a ‘big cheese’. Ganesha as usual does his best to steal the show; I just worry how Chopra will cope when his elephant gets too big to fit in the van.