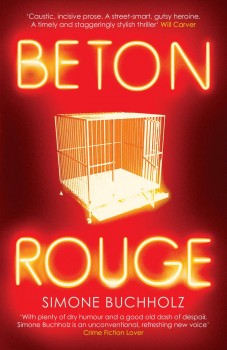 Public prosecutor Chastity Riley and Detective Chief Inspector Ivo Stepanovic meet when they are called to investigate a horrendous case of a naked and tortured man left in a case outside an office of Germany’s biggest magazines where’s he been working.

Beton Rouge, translated from German by Rachel Ward, is the second in the series featuring an interesting modern and spikey character – Chastity Riley from the Public Prosecution Service. The book starts with a gruesome find one September morning in Hamburg. In front of the office of one of Germany’s biggest magazines there is a solid metal cage with an unconscious naked man inside. He’s been tortured and is soon identified as Tobias Rosch, head of HR.
Not long afterwards Leonhard Bohnsen, the publishing director for the magazines division, becomes the second victim of someone who appears to really enjoy inflicting horrendous pain. When they’re able to answer questions Rosch and Bohnsen state that a big black shadow was responsible for their terrible fate but cannot explain anything else.
They mention in passing that they have known each other and another big fish at the company, Sebastian Schmidt, since early teenage years when they were at the same boarding school in Bavaria. Rich and arrogant Schmidt, currently a suspect in a particularly nasty hit-and-run accident, is being investigated by Riley’s pal DCI Calabretta. The two separate teams consider joining forces.
Riley doesn’t play second fiddle to her new professional partner Detective Chief Inspector Ivo Stepanovic. As a public prosecutor her role is different to all those hard-core detectives steering the investigation; nevertheless she is very involved. They feel that the reasons behind abductions and torture don’t lie in the job-related state of affairs of worsening conditions in the offices and the disillusioned workforce, even though there is an abundance of bad feeling floating about.
Instead they focus on the three men’s past and decide to visit the Bavarian school. The place appears depressing, it’s in a desolate area and the unhelpful headmaster has no useful information to share, yet a picture of an extremely unpleasant past and brutal behaviour starts to emerge. A fourth boy shared the room with the trio who had abused him mercilessly. However, there are no traces of him as an adult.
Blue Night introduced Riley’s group of close friends centred on a pub of the same name. Here the relationships between the main characters change slightly which has a huge impact on her, especially as her partner Klatsche couldn’t wait any longer for some kind of commitment.
The effect of the shifted alliances flows into her working connection with Stepanovic. It seems that she has met her emotional match – another flawed and restless human being. Apart from solving the crime together, they are attracted to each other and their shared vices: cigarettes, alcohol and insomnia.
Simone Buchholz’s style which is sexy, exciting and thought-provoking spills into the full cast of characters, leaving the reader in awe of the whole pithy fictional world she has shaped. Raw, visceral, pared down dialogue is stripped of anything that could be felt as unnecessary. Short intense chapters with snappy titles add tension. Through philosophical musings and sharp observations on how society misses certain warning signs and ignores those who cannot deal with pain on their own, the author casts a critical eye on the contemporary society while creating a brilliant dark thriller. This slim volume of gritty, uncomfortable noir at its best is also very addictive.