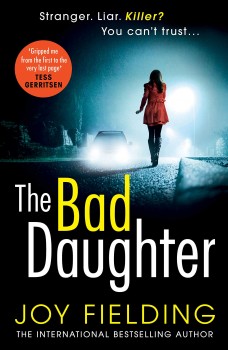 Robin, the daughter who turned her back on her family, is going home – now that half of them are dying.

Los Angeles therapist Robin Davis charges big money for dispensing advice yet suffers from panic attacks and can’t sort her own family dynamics. She hasn’t even been back to Red Bluff for the last five years, since her father’s marriage to her former best-friend, Tara. When her spiteful older sister Melanie calls with the shocking news that their father, Tara, and her 12-year-old daughter Cassidy have been victims of what appears to be a home invasion, Robin reluctantly returns home.

Robin is in no state to handle the emotional strain of an acrimonious reunion with her immediate family let alone face the reality of the savage crime. And she gains no solace from her corporate lawyer fiancé, Blake Upton; he is either unavailable or uncommunicative, and Robin is quite convinced he is cheating on her.

There are certain sub-genres of crime stories that I never grow tired of, including those where psychology and suspense play as large a role as the crime itself. Joy Fielding is known for her suburban angst, almost guaranteeing her readers compelling family drama. Her novels are somewhat formulaic and coated with melodrama, but they are effortless escapism for those who don’t mind having their imagination tested. Having enjoyed some of her earlier novels I was looking forward to reading The Bad Daughter. However, this book feels tired and falls below her usual competence.

With a cast of one-dimensional stereotypes and stilted dialogue that is woefully lacking in nuance or emotion, it is difficult to connect with the characters. And far too often, the author resorts to swathes of tell. Misdirection feels clumsy and obvious, which makes the criminal as easy to spot as ragwort in a bouquet of roses.

Robin is farcically gullible for a psychologist. Although she comes out with the mandatory therapy clichés, she is utterly naïve and impossible to believe. Her self-absorbed and woe-is-me attitude left me wanting to slap her rather than root for her.

Melanie, with her barbed and snide remarks, is, at first, an amusing, acerbic juxtaposition to her lily-livered sister. But it is overdone, and her character slides into a soap opera portrayal of bitterness and jealousy. I found her constant belittling of everyone she encountered exhausting.

Cassidy, a 12-year-old, is extraordinarily precocious and her dialogue gratingly unbelievable. Her ability to compartmentalise like a man and flip from talking about murder to food without drawing breath should worry parents whose children have a similar ability. Alec, Robin’s younger brother, is flat, and Melanie’s 18-year-old autistic and awkward son, Landon, is sadly a stereotype.

The introduction to each of the characters is interesting. Unfortunately, the author overdoes their traits, dialogue and behaviour, making them predictable and shallow parodies. Motives and circumstantial evidence linking the locals and family to the crime feel forced and unconvincing.

That said, the Bad Daughter is easy to read with plenty of twists and turns, albeit a little unconvincing. Not all the surprises fall flat, and for readers who let the whodunit come to them rather than searching for clues, the denouement will be a gratifying bombshell.

The story is like eating a burger when you’ve ordered a steak. The poorly hidden mystery and soap opera characters makes the story fall between two stools, neither mystery nor family drama. But it is a burger that fills a hole and is strangely satisfying.