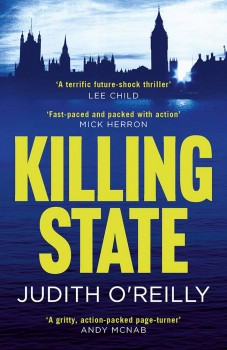 Michael North is employed by an establishment figure as a spy and assassin. He is given the task of killing Honor Jones, an MP who has been asking questions about certain powerful people.

The beginning of Killing State is highly promising. We are presented with a prologue in which a woman, Honor Jones, MP, is trying to find her missing friend Peggy. As she walks towards a park she is unaware that she is being followed but when she sits on a bench and a stranger comes and sits next to her she is certain that he has something to do with her missing friend. She immediately asks him: “Where's Peggy?”

The man turns out to be Michael North, a former soldier-turned-assassin, and whilst he has been given the task of killing Honor, he has no idea what she is talking about. On this occasion, although he cannot say exactly why, he finds it impossible simply to carry out his orders and go on his way. He experiences some form of attraction towards her and resolves that when he does kill her she won't suffer. Here the prologue ends.

The reader is, of course, aware that he is not going to kill Honor and is anxious to see what happens next. We are asked to believe that this is a Damascene moment in North's life but it isn't obvious why it occurs.

We learn more about the two characters, including the fact that both had suffered tragedies in their family lives, though whether this is intended to explain their consequent actions is not clear. What we are told about North, however, is clear. He has seen action whilst in the army and had been shot in the head. Miraculously, he has recovered and – even more miraculously – the bullet remains lodged in his brain. Apparently, this somehow has had the effect of developing his instinctive reactions. He is never quite sure when he will die but he expects it at any time.

It might have been expected that the many situations in which he finds himself subject to violence might have precipitated movement of the bullet and thus his death, but he seems to bear a charmed life. He is, in fact a totally unbelievable figure who, with his ability to triumph on every occasion, no matter what the odds, makes Jack Reacher look like Peter Pan. Equally unbelievable is a 14-year old girl who seems capable of hacking into any computer and deciphering any code within a matter of minutes.

The first part of the novel is concerned with Honor's search for Peggy and North's efforts to save the life of Honor who he knows is being targeted once he himself has indicated that he is not prepared to kill her. The organisation that wants her dead is known simply as the Board and stretches back to a time when Elizabeth I was on the throne. Its aim, as far as one can see, is to prevent democracy from spreading into areas where it doesn't belong, but it is portrayed in such general terms – the usual establishment collection of senior military men, top rank civil servants and Cabinet Ministers – that it too fails entirely to convince.

There are a considerable number of surprise endings to chapters, the aim being dramatic effect, but they rarely manage to achieve that. In fact, overall the novel fails to sustain the interest that the first few pages promise. The author tells us in a note that Michel North will appear in a new novel later this year. I live in hopes of some improvement.