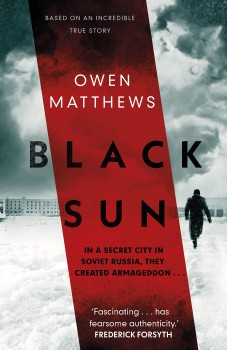 Major Alexander Vasin of the KGB is sent to a secret Soviet site, which is producing a powerful new bomb, when one of the key scientists dies from radioactive poisoning.

In 1961, at the height of the Cold War, the USSR is determined to demonstrate the superiority of its technology by perfecting a fusion weapon more powerful than anything seen before. Resources have been funnelled into Arzamas-16, a town blanketed in secrecy where the best scientists and engineers in the country can work without interruption.

Ten days before the planned test of the bomb they have produced, Petrov, one of the leading physicists, dies, poisoned by a massive dose of radioactive thallium. The local KGB have decided this was a suicide, but Orlov, the head of the ‘Special Cases’ in Moscow smells a rat and sends Major Alexander Vasin to establish the truth.

Vasin is relatively junior in rank, and the KGB in control of Arzamas use intimidation and obstruction to force acceptance of their own version of events. Vasin quickly comes to realise, however, that suicide is unlikely and that there are reasons for suspecting murder. With only a few days until the test, he is under pressure to complete the job he has been sent to do.

This pressure is compounded by the affair he has been having with Orlov’s wife. Vasin’s wife has discovered his infidelity and is threatening divorce, as well as a public denunciation. Orlov’s reaction is likely to be volcanic, and only by a spectacular coup of detection brilliance can Vasim hope to escape retribution.

A note from the author states that Black Sun is based on a true story, with the bomb’s principal designer Adamov in the book being loosely based on Andrei Sakharov. Owen Matthews says that the power of Sakharov’s bomb was such that concerns were expressed that the device might cause a runaway chain reaction in atmospheric gases. Although these fears were not realised, Sakharov refused subsequent work on such bombs and fought a brave campaign against atmospheric nuclear testing.

The book also conveys much else about life in Soviet Russia at the time. It is striking to Vasim that the priority accorded to the project gave workers in the town access to consumer goods unknown to the rest of the general population, and a relaxation of controls on imported foreign music and literature. This did nothing to curb the cynicism privately expressed about politics. The whole gives a convincing insight into Soviet life as it was experienced by those whose mental powers had granted them exceptional status.

And if a grounding in particle science and its application to warfare combined with an exploration of mid-20th century Soviet society doesn’t grab you, there is always the crime story. Vasim needs to be both brave and ingenious in his efforts to break the conspiracy of silence around Petrov’s death, and after a few days of frustration makes a breakthrough culminating in a thrilling finale. This is the first in a promised trilogy, and I am hungry to read the next instalment.