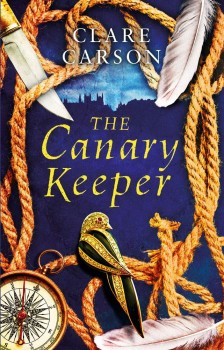 A young woman finds a body on the banks of the Thames. When corrupt police try to frame her for involvement in the death, she retraces the dead man’s steps to the Orkneys to prove her innocence.

Clare Carson, an ethnographer and international development adviser, announced her arrival on the crime writing scene with a clever trilogy set in the present and based in London and the wild islands of the Orkneys. Her heroine was a feisty but surprisingly fragile, young woman, seeking to solve the mystery of her father’s murder. And she repeats that formula in her latest work – an almost classic 19th-century mystery with a twist, meaty, dark, full of gaslit menace and beautifully written.

The result is a mixture of suspense, adventure and romance in a thriller, whose superb storytelling, convoluted plotting and a real sense of time and place will keep readers glued to the page.

Branna ‘Birdie’ Quinn’s sleeplessness and thoughts of her missing husband, presumed drowned, lead her to the misty banks of the Thames in an early morning walk in May 1855. She witnesses a body being dumped on the foreshore from a metal canoe, then partly mutilated.

Soon the city is alive with rumours of a cannibal killer from Arctic wastes via one of the Hudson’s Bay fur trading ships moored in the Pool, a theory borne out by two of the company’s unique trading tokens she has found on the body. But it is linked to talk of the killer’s ‘accomplice’ – a young woman dressed in widow’s weeds!

Bridie, wilful, haughty, and intelligent, realises she is being framed by the corrupt River Police – the Filth – and must clear her name or suffer the fate of her docker father, hung for the alleged murder of a policeman.

When the dead man’s name becomes known she decides she must trace his footsteps to his home in the Orkneys in search of clues to prove her innocence. She is aided by Solly, a detective in the newly formed Met Police CID, who harbours ambitions to become the new man in her life.

Both are outsiders. He’s a Jew in an era when his race are considered suspect and she’s an Irish-descended woman from a near-ghetto area of the South Bank dominated by her countrymen, who are notorious for their part in theft, smuggling and other crimes which cost shipowners and businesses the modern equivalent of millions of pounds every year.

Bridie makes what is a dangerous journey for a woman alone and is plunged into the insular, backward and superstitious world of the remote, bleak and beautiful Orkneys with its dramatic landscape, seabirds, ruins, howes, standing stones, myths and tales of witchcraft.

The small town of Stromness provides a stark opposite to the heaving, filthy alleys of Southwark and the Borough – and a setting where almost anything seems possible. In a careful balancing act Carson release key information little by little, weaving her
characters into a complex web of relationships as the plot drives towards a dramatic denouement.

Woven throughout is the disappearance in 1845 of Sir John Franklin and his two ships, the Terror and the Erebus, last seen in Baffin Bay as they searched for the mythical North West Passage route to the Orient.

If this fascinating historical mystery adds background and credibility, one error, which should have been picked up by the publisher’s editors, certainly detracts from it. Solly several times refers to the River Police as ‘backward’ and alludes to their fear of being absorbed into the growing Met. The Marine Police Force, England’s oldest, was formed in 1798 to tackle theft and looting from ships anchored in the Pool and the lower reaches and docks of the Thames. It merged with the Met in 1839 and became known as the force’s Thames Division!

Ignoring that historical blip, this is an exhilarating story and marks Carson as an author to keep an eye on for the future.