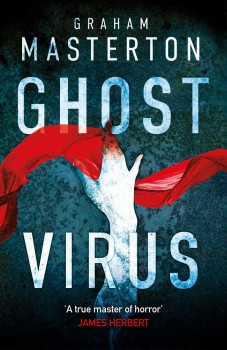 The horrific vision of the woman who killed herself with acid will never leave DC Jerry Pardoe’s mind. But soon it will have to make space for worse images.

London has always had its share of murders, mostly senseless, other than to the person who committed them. But now something is infecting the capital city, causing good and normally passive non-violent people to kill. It starts with a suicide. But it soon becomes clear to DC Jerry Pardoe and DS Jamila Patel of the Tooting police, that however unbelievable it seems, the one link between the ever-increasing list of murders is clothes – second-hand charity shop ones that appear to be possessed, coercing their wearers into killing.
With time their enemy, the detectives must bring the ghost virus down before it becomes an epidemic, slaughtering the inhabitants of London.
I grew up with Stephen King, James Herbert and Graham Masterton, so a frisson of pleasure and awe scuttled up my spine when I found a book by Masterton in my review pile. Perhaps this eager anticipation of returning to my read-it-by-torchlight-under-the candlewick-counterpane youth magnified my disappointment. Perhaps there are fewer horror stories than I thought that work without the benefit of the silver screen. Perhaps I have become cynical about the impossible. But this book disenthralled me from the horror genre in a most disheartening way.
Ghost Virus reads like a parody of a horror story, bringing to mind such travesties as Pride and Prejudice and Zombies, where the title says it all. The writing is dated, stuck in a 1970s time-warp and filled with blue-eyed-brown-haired-black-jeans irrelevant detail. The dialogue is clumping, generic and long-windedly real rather than pithy. The pacing is erratic. The leaps in the detectives’ thought processes defy gravity and should be short-listed for the Olympics. And the plot, fragile from the start, segues from the questionable to the absurd extremely fast.
Despite that, I am sure it will be a while before I dare venture into a charity shop on the quest of sniffing out a bargain buy. Not because the thought of an old jumper chasing me down the road is terrifying, but because it is hilarious, and I might get an uncontrollable and embarrassing fit of the giggles as my imagination tends to run riot at the most inappropriate moments.
Ghost Virus is an easy if underwhelming read for those who enjoy gore over plot.