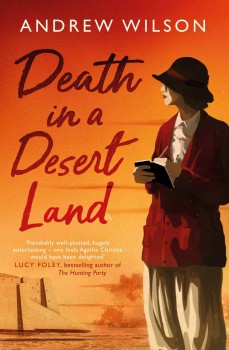 Death in a Desert Land

Agatha Christie is asked by British intelligence to investigate doubts surrounding the death of explorer Gertrude Bell, and plunges into a snake pit of passions, deception and poisonous plots in the blistering heat of the Iraqi desert.

While, in general, I strongly dislike the growing trend of positing historical figures as detectives, Wilson has been remarkably careful with his version of Christie. With a few variations from the truth such as her involvement with the British intelligence services, he has resisted the temptation to ‘modernise’ her character in the name of political correctness. She remains what she appears from her autobiography – the product of a wealthy upper-middle-class family who, for all her American and Irish parentage, was essentially very British.

This clever blend of fact and fiction – many of its characters were actually her friends and the widely-travelled Christie did visit Sir Charles Woolley’s excavations at the near-8,000-year-old Sumerian city of Ur, once said to be the largest in the world and which gave rise to the stories of the Great Flood which features in both the Bible and the Epic of Gilgamesh.

The fictional Christie is pressed by her friends in intelligence to investigate the mysterious death of Gertrude Bell, the famed explorer, writer, administrator and archaeologist who played a major role in establishing modern Iraq and was influential in British imperial policy-making in the Middle East due to her knowledge and relations with tribal leaders.

In 1926 Bell was found dead in her Baghdad home, apparently from an accidental overdose. But letters, purported to have come from her and uncovered by British intelligence, suggest her death was murder and that the killer can be found at Ur. Christie arrives at the ancient city to discover the small archaeological team is riven by deception, boiling passions and poisonous plots, all played out under a white hot and relentless desert sun.

Aficionados will recognise the similarities with the real life Christie’s Murder in Mesopotamia, one of Hercule Poirot’s most baffling cases, particularly the oppressive tension and the bizarre visions and nervous terror suffered by one of the protagonists. And there’s certainly enough red herrings in this story to keep the brilliant Belgian fully occupied.

Death in a Desert Land is beautifully and stylishly written, lyrical and compelling, and brilliantly plotted. Wilson has captured a massive part of Dame Agatha’s sheer readability to produce a classic golden age murder mystery, with its list of likely suspects in a confined setting.

You won’t have to know much about her novels or Christie herself to enjoy a story which will appeal to every armchair detective. While I remain doubtful about the portrayal of a woman vulnerable after her recent painful divorce, Wilson deals with the subject relatively sensitively, choosing mainly to concentrate on her sense of adventure, intelligence and empathy.

His shrewd character observations of the main characters and wonderful descriptions of the beauty and dangers of the desert make this a story which stands alone without any real reference to the previous books in the series. For me, it’s an absolute winner!