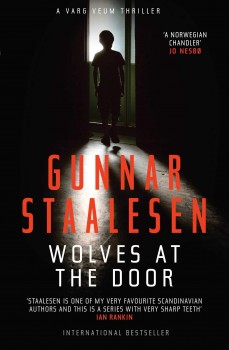 Wolves at the Door

Bergen’s social-worker-turned-private investigator Varg Veum, who’s been scared by earlier accusations of sexual abuse, decides to reopen his earlier case after he is nearly killed by a speeding car.

Bergen’s most famous PI Varg Veum has been acquitted of committing a hideous crime well over a year ago. He was wrongly accused of participation in a case of child pornography and sexual assault after someone had planted incriminating files on his computer. The allegations nearly destroyed him.
No wonder, then, that when one dark January night a car speeding on a dark street comes very close to killing him, Veum is shaken, suspecting it might have been connected to two recent, seemingly unrelated, deaths. Two men convicted of the same crime served their time in prison, and soon after being released, have both died.
The police didn’t find anything suspicious about the similar deaths in the space of several weeks, but Veum suspects that something sinister is going on, and he fears for his own life, and also is terrified that something terrible will happen to his partner Sølvi and her young daughter. On own initiative and pushed by gnawing anxiety Veum begins investigating the old case again.
His already delicate connection with the local police is tested in various ways, as the long-term love-hate relationship shows distrust, annoyance and using different methods to achieve similar goals on both sides. But this is ultimately the only route to work towards some justice, and maybe a chance to break a cycle of sexual abuse carried through generations and within family homes, under the unseeing eyes of disturbed or dysfunctional parents.
Veum himself, as a formal social worker with experience in child protection, cannot come to terms with what has been going on, and as always pursues every small lead, analysing each tiny bit information, trusting his gut feeling, and trying to be civil when faced with pure evil. An undercurrent of anger and frustration is never far away, adding more darkness and drama to the investigation which shatters ordinary lives.
Gunnar Staalesen’s meticulous plotting and incredible attention to detail create an unsettling environment in which his main characters are battling with their own consciences and the cruelty of social circumstances full of misfits and victims. The social message is incredibly strong in Wolves at the Door as the author blends excellent chilling storytelling and a sharp analysis of modern society.
However, the message is delivered through exquisite writing, emotionally tense and with a huge dose of insight into the human nature. Witty yet sad one-liners appear throughout this hardboiled novel but aren’t for showing off, more to acknowledge the state of affairs.  Morally reprehensible decisions are not justified at all but given enough light and space to understand why people might behave as they do and turn into abusers.
As always Don Bartlett’s superb translation brings every stylistic nuance to the fore, as both the author and the translator are masters in their respective crafts, feeling confident and comfortable when presenting another heart-wrenching case for Veum. And once more, the finale is subtle and painful, as the echoes of the unjust accusation and the question of who his real father was from earlier book Big Sister resonate powerfully in the present. Wolves at the Door is another masterpiece by the Norwegian Chandler.