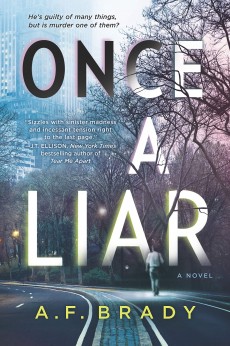 New York lawyer Peter Caine has built a successful career defending some very nasty people but finds himself as a suspect when his ex-mistress is murdered.

Peter Caine had a troubled upbringing. Abandoned by his parents, he was taken in by his uncle, but was always made to feel an outsider in his uncle’s family and broke away as soon as he was old enough to carve his own path. He was determined to gain wealth and reputation, and studied to become a lawyer and graduated top of his class.

His route to success was assisted by Marcus Rhodes, who took Caine into his firm and taught him to be ruthless in the defence of his clients, predominantly rich men accused of violence towards others.  This policy has paid off in terms of wins, although the victims of these crimes have been deprived of redress.

This aspect of his work does not bother Caine, however, as he is a sociopath. His personal relationships are cultivated solely to enhance his professional reputation, and he has no real feeling for the women he lives with, or his son Jamie. In social situations he fakes the reactions he sees in others to seem normal, but he is well aware that he lacks empathy for others and is entirely self-interested.

The book is divided into interleaved chapters headed ‘Then’ and ‘Now’, the first describing his entry into the firm of Rhodes and Caine, his courting of and marriage to Rhodes’ daughter Juliette, and the birth of his son. By ‘Now’ both Rhodes and Juliette have died of a rare cancer, and Caine’s new partner Claire insists that Jamie comes to live with them, despite Caine’s reservations.

Life takes a decided downturn, however, when Caine’s ex-mistress Charlotte is murdered. Charlotte is the daughter of Harrison, the DA, who has been at crossed swords with Caine for many years. As the circumstances of the death are investigated, alibis appear to rule out some of those with motives, and Caine comes to look like the most likely suspect. He has been guilty of many things in his career, but could this extend to murder?

The author takes a considerable risk with Caine as the lead character given that he is so difficult to like. He sweats when details of his upbringing ever look like being exposed, and when expected to show some semblance of sympathy for others, but someone who has no concern for anyone else is never going to endear himself to readers, apart from other sociopaths perhaps.

What seems very odd is that his wives and girlfriends fail to realise just how odd Caine is, or perhaps are prepared to accept his behaviour given the money and fame generated by his record in exonerating rich, badly-behaving people. The whole cast come across as preoccupied with wealth and status, even when they are supposedly public benefactors. It seems likely that some readers will find it hard to engage with their problems.