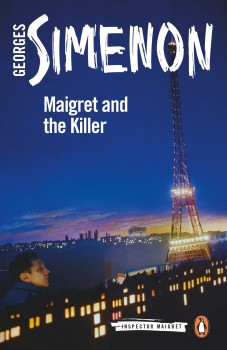 Maigret and the Killer

A young man with a particular interest in recording the voices of strangers is stabbed and killed in the street during an early spring downpour. The hobby initially proves to be a distraction for Maigret.

Monsieur et Madame Maigret are dining with their friends Doctor Pardon and his wife when the doctor is called out in a rainstorm to attend a young man collapsed on the pavement nearby. Maigret attends out of habit and naturally takes the case into his hands. The man has been repeatedly stabbed and dies soon thereafter.

It is quickly established that the victim is Antoine Batille, son of a rich supplier of perfumes and beauty products. Batille was a quiet youth with few friends but great enthusiasm for his project of recording the voices of strangers in bars, restaurants or on the street. He carried a tape recorder around his neck for the purpose, although most observers imagined the device to be a camera.

Maigret sets his staff to work deciphering the most recent recordings and hears what appears to be a group of three men casing premises for a robbery. After questioning staff at the premises visited by Batille, Maigret manages to identify the participants and has them followed. As the target is out of town, Maigret contacts his equivalent in the Surete Nationale, and arrests are made.

The solving of one crime leads to hopes that the same men are also responsible for the murder, although they refuse to speak and Maigret in any event feels that the killer is to be found elsewhere. Newspaper reports to the contrary, however, elicit a response from someone who Maigret immediately feels is the right suspect; but how is he to be persuaded to confess his crime?

This latest in the Penguin re-issue of the Maigret stories brings to the fore the detective’s extraordinary ability to tune in to his quarry. Recognising the weight on her husband’s shoulders, Mme Maigret says to herself that “it was as if he identified with the people he was hunting and suffered the same torments as they did.” Maigret muses that a killer “cuts himself off ... from the human community”, and seeks to make a connection.

It is this understanding which enables him to encourage the perpetrator to make contact and give him the confidence to do what his conscience is urging. Maigret is reluctant to use the grosser methods of detection which might panic his foe, despite a deadline from the magistrate who is of course worried that any delay risks further deaths.

Despite these pressures, Maigret judges the situation in a masterful manner and brings things to a satisfactory conclusion. The mature Maigret is absolutely on his game, and never looks like being wrong-footed.