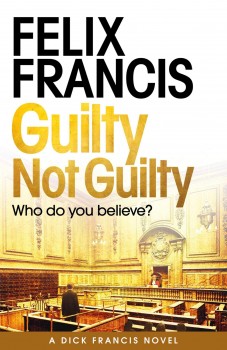 Guilty Not Guilty is billed as ‘A Dick Francis novel’ and is the latest in a long series featuring crime and horse racing, with Felix Francis now carrying his father’s mantle. It stands alone, however, and calls for no special enthusiasm for racing, although we do hear of the protagonist’s belief that unpaid volunteer stewards are a good thing and that the current trend to replace them with professionals is to be deplored.

This character, actuary Bill Russell, is at Warwick races serving as a volunteer when police arrive to inform him that his wife Amelia has been found dead at home in Banbury. Their questions make it clear that Bill is their chief suspect, and Bill knows just who gave them the idea – Amelia’s detestable brother, Joe.

Despite Bill and Amelia’s devotion to each other, Amelia had suffered with depression for some years, and had attempted suicide on more than one occasion. Bill believes Joe to be largely responsible for this, through the hostile emails he has sent and his lies which alienated their mother Mary from her daughter.

Police arrest Bill and although he is soon released, he is pilloried in the press and wholly occupied with grief. After a few days, however, he gets a grip and starts to assemble some evidence to substantiate his alibi. He also gets a hint about Joe’s activities which provide a starting point for a case against him, and eventually he is brought to court. However, as far as the murder is concerned the evidence is at best circumstantial, and Bill worries that Joe may escape justice.

Despite the horrible circumstances of Amelia’s death, and the floods of tears Bill sheds, there is something rather tongue-in-cheek about the author’s style which makes it hard to take his predicament entirely seriously. DS Dowdeswell, who takes some time to be persuaded of Bill’s innocence, reminded me of the Saint’s Inspector Teal, slow-moving and eventually becoming a sort of friend.

There are also frequent digressions into areas related to the action: the enthusiasm of the media for identifying a culprit, no matter how lacking the evidence; the problems of inheritance tax and contentious wills; reasons for suicide; and guidance for persons facing questions from police or in court.

These matters make it difficult to take the book as real life rather than a theoretical construct, but it certainly entertains as well as being instructive. The final third is largely taken up with evidence given in court, and the nuances of the barristers’ approach in elucidating salient facts (and obscuring others) is excellent. And just when you think the tale is rumbling to a predictable end, the author throws in a twist.