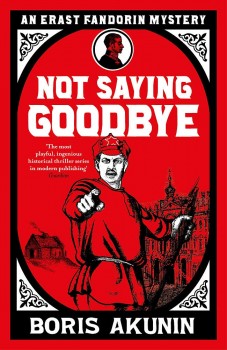 Detective Erast Fandorin wakes after three years in a coma in a world he barely recognises – Russia in the throes of revolution.

After a bullet through the skull, celebrated detective Erast Fandorin has been in a coma for three years, kept alive only through the care of his faithful Japanese assistant Masa. After treatment by a Chinese acupuncturist and a chance close miss from another bullet, he wakes to find the world around him has been remade.

It is 1918, Tsarist Russia has been swept away, and various parties vie to determine the future of the country. The two strongest are the Bolsheviks (the reds) and those seeking to restore a more familiar style of government (the whites), but anarchists (the blacks) and various individuals exercising local power complicate the picture.

Thanks to his mastery of certain Taoist practices, Fandorin recovers his strength remarkably quickly, and whilst exercising on the street comes across an old couple who have been robbed. He gives chase and follows the culprit to the anarchist headquarters. Despite cooperation there, things take a dangerous turn when the building comes under attack from the reds, and Fandorin’s pursuit becomes even more difficult.

The narrative leaves Fandorin for a while for Captain Romanov, a man caught up in the struggle for political and military supremacy. Romanov has been summoned from the German front by the Cheka, the red ‘Commission for Combating Counter-Revolution, Speculation and Sabotage’, and charged with infiltrating the whites. This is a high-stakes game, calling for fast thinking and innovative solutions to enable Romanov to explore the details of his enemies’ organisation.

Romanov and Fandorin then are brought together in an adventure in white territory. Romanov is again playing a subversive role but things become very complicated when he finds himself competing with a second red organisation. Fandorin is not politically committed but after an explosion in an orphanage is determined to ensure the culprit is punished. He has some success but an enemy has arranged a devilish plot to see him taken out of the game permanently.

The action throughout conveys the desperate struggle for power in Russia at the time, with death and torture routine. You don’t get much of a sense of liberation and freedom which was also characteristic, although the author brings to life a range of extraordinary figures which the dislocation has given the opportunity to take charge. There is throughout a sense of a society adrift, without any surviving institutions, with spies prevalent and where decent behaviour is a matter entirely of individual character.

The Russian flavour in the writing comes across strongly, and this is enhanced with many references to characters from Russian literature, not all of which will be familiar to readers from elsewhere. The translation is, however, very clear. Fandorin is an interesting protagonist, but really takes a back seat here to Romanov and the struggles of the time.