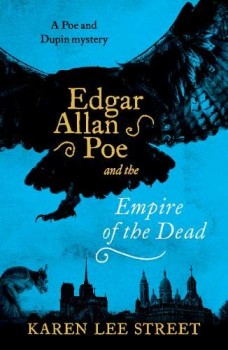 Edgar Allan Poe and the Empire of the Dead

Edgar Allan Poe travels to Paris to help his friend, the detective Chevalier C Auguste Dupin, hunt down the criminal who brought his family to death and ruin. Their search takes them into the Empire of the Dead, the tunnels of the necropolis which run beneath the city.

This is a wonderful and imaginative climax to Karen Lee Street’s trilogy featuring Edgar Allan Poe, novelist, poet, editor and critic, a central figure of American literature and regarded by many as the inventor of detective fiction.

Poe is often depicted as a mad genius or tormented artist who exploited his personal struggles, frequently reflected in characters who share similar identities. Street has taken full advantage, bringing one his most famous characters, the French detective le Chevalier C Auguste Dupin, to life. Scarcely more mentally stable than Poe himself – in fact, almost a mirror image of the jittery, death-obsessed author – Dupin spends much of his life hunting the criminal who brought his aristocratic family to ruin and death in the French revolution.

Poe’s own nemesis, a man who has sworn to destroy him for his ancestors involving his own family in the infamous case of the London Monster some 70 years before, provides a deadly counterbalance.

After the earlier investigations which were spread over a nine-year period in London and Philadelphia, Poe is summoned to Paris by a forged letter, allegedly from Dupin. The prefect of police engages them to recover a letter stolen from an infamous Parisian salonnière, and they must try to decide whether the thief was one of the French literary greats who attend her salons, or could it be Dupin’s enemy, using the theft as a bait to destroy him and fulfil his own mad ambition to become the Emperor of France?

In an exciting and wonderfully atmospheric read, Street’s superb evocation of 19th century Paris and a clever, twisty and positively Gothic plot takes Poe to some very dark places, both in the literal and psychological sense. The pair are forced to deal with apparently supernatural events presaging the performances of the Grand-Guignol theatre in the Pigalle which specialised in naturalistic horror shows, lifelike automatons, and the underground passages and chambers of the limestone catacombs beneath the city.

Street continually ratchets up a sense of horror and otherwordliness that makes this a story not for the faint-hearted! It involves scenes Poe himself would have been proud to have written. The denouement is so beautifully presented that this is a novel which is not only a good read, but also incredibly poignant as well.

Poe’s and Dupin’s complexes, phobias and insecurities offer a superbly morbid and dark background. The book is clever, witty, and wonderfully researched, and offers a re-imaging of the salient details of Poe’s life and the repositioning of his relationship with his finest creation. It is beautifully constructed with some positively lush prose and all the suspense, unease, darkness, violence and treachery one would expect of Poe himself.