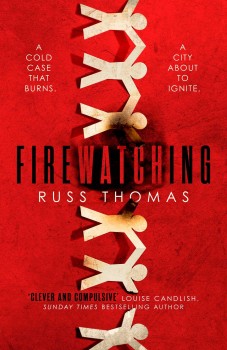 When a body is found bricked up in the basement of a dilapidated old house, DS Adam Tyler gets involved in a cold case that suddenly starts to get very hot to handle.

When the flames are fanned under a cold case, DS Adam Tyler wants to get involved, but he’s still under a cloud for having thumped a senior officer, so it’s by no means sure that he’ll get a look-in when the body of a man is found bricked up in the basement of a derelict house.

Undeterred, Tyler turns up at the crime scene and does his best to convince acerbic DI Jim Doggett that he should be involved. Doggett isn’t keen, but DCI Diane Jordan has a soft spot for Tyler and allows herself to be persuaded, but it comes with the warning that he’s drinking in the last chance saloon as far as she’s concerned.

Tyler gets off to a bad start in the investigation when a recent one-night stand comes back to haunt him in the person of the murdered man’s son, leaving Tyler with a dilemma. Should he report a conflict of interest to Doggett and Jordan, or should he keep quiet and hope the problem goes away? Unfortunately for Tyler, his liaison with Oscar Cartwright looks like it’s very likely to come back to haunt him.

The revelation that Gerald Cartwright was murdered in the remote village of Castledene near Sheffield rather than simply disappearing comes as a shock to the villagers, but it quickly becomes clear that there are plenty of secrets hiding behind net-curtains and dilapidated cottages. There were plenty of rumours at the time, mainly concerning Cartwright’s business dealings.

His elderly friends Edna and Lillian still live in the village, next door to the house where the murdered man was entombed. Someone is sending notes to them, intimating that they have secrets that they wouldn’t want to be revealed. Edna has cancer, and Lillian is frail, both mentally and physically, but they are both determined to keep what they know to themselves.

A series of arson attacks, escalating in severity, act as a backdrop to the investigation, and gradually the two strands of the story start to converge.

The constant sniping between Adam Tyler and Jim Doggett provides an interesting thread running through the book. Doggett keeps up a steady stream of homophobic jibes directed at Tyler, who keeps mental score of each one, but prefers to give as good as he gets rather than complain, as in the macho police culture no one likes a grass. I started out thoroughly disliking Doggett but Russ Thomas cleverly steers away from too much stereotyping, and an unlikely bond develops between the two men and it’s gradually revealed that the baggage Tyler is carrying around doesn’t simply relate to his sexuality, which he doesn’t see as anything major in the context of his work.

The plot hangs together well, and Thomas’s characters are all well-rounded, nicely written and – mostly – pretty likeable, which makes a pleasant change from wading through what sometimes seems to be a deep sea of the sort of terminally unpleasant and emotionally challenged main characters that seem to be in vogue at the moment. I particularly liked deepest Yorkshire lass PC Mina Rabbani, who finally gets a chance to shine in CID, even though she can’t work out who she dislikes most, Tyler or Doggett!

The plot smoulders and then ignites as secrets from the past emerge and the stakes get progressively higher, as do the flames. I enjoyed Firewatching a lot and hope this isn’t the last we see of DS Adam Tyler and his Yorkshire colleagues.