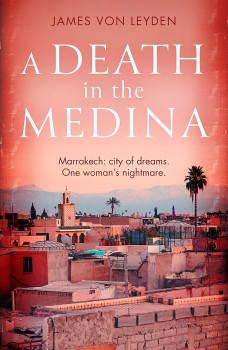 A Death in the Medina

During a hot Ramadan in Marrakech, the body of a Moroccan girl is found dead, dumped in a handcart. Despite distractions, local detective Belkacem persists with an investigation.

During the month of Ramadan, Muslims fast during the hours of daylight, a fast which encompasses water or even cigarettes. This particular year the August temperatures are at a record high, putting strain on everyone.

Young detective Karim Belkacem is under special pressure: his sister is planning her marriage and he is going to have to get a second job as a nightwatchman to pay for it. His worries are compounded when by chance he is first on the scene where a young woman has been found murdered. She’s Amina Talal, to whom he was once affianced.

Belkacem keeps in touch with developments and becomes convinced that Talal’s death is connected to a nightclub that she visited. He is pulled off the case, however, and re-assigned to address the problem of counterfeiting, which is rife in Marrakech. Lack of sleep and proper hydration increasingly affect his thinking, and although he worries continually about his several problems never seems to make much headway.

The book opens with a visitor reporting the theft of her handbag to Belkacem, after which she returns to her place of stay, a traditional riad run by a British woman, Kay. Kay skilfully uses social media to promote her riad and create an unearned reputation for design. Her boyfriend Sebastien is an architect employed by a rich Arab on a major hotel project, and corners are being cut to ensure completion is ahead of competitors and on budget.

These foreigners are all on the make in one way or another and not particularly sympathetic, but are they responsible for something much worse? Belkacem discovers that Sebastien was present at the nightclub that Amina visited on the night of her death, and the sand which adheres to her body suggests that she was killed at a building site.

Belkacem does not seem particularly deserving of our concern either; his reception of the robbed tourist suggests indifference, and his confusion stupidity. As the book proceeds, however, it becomes clear that he takes the obligations of his religious beliefs seriously, and that he is impressively persistent in the face of setbacks. The reader is agreeably surprised when he achieves results.

My enthusiasm for this story grew with the reading. The crime story is lengthy and convoluted and the author takes us in several directions before revealing the solution late in the book. At the same time the concerns of locals and visitors are well illuminated, sufficient to give a deeper understanding of the way Morocco operates. The complexities of life are a challenge to foreigners, but locals face worse problems and those who maintain human values despite the antagonism of institutions earn our respect.